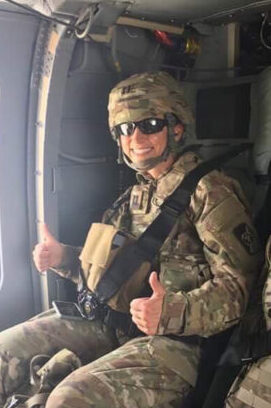 When Major 0-4 Lindsay Leskanich sees a package with her name on it, a smile instantly settles on her face. She knows it’s from home. From the Dwight community. From Support Our Soldiers (SOS). “When I was deployed, it was awesome to see the SOS boxes. It’s so incredible,” said Major Leskanich, who is a Dwight native and graduated from Dwight Township High School in 2001. “I haven’t seen any other organization like them. They put so much heart into what they do. Those boxes mean so much. “It doesn’t matter if you’re deployed or stateside. Every holiday you get something and it’s so cool because it just speaks so much about the community and how much people care. I can’t tell them how much I appreciate the community and SOS. They include people beyond them. I still have a note that a student sent me last Christmas. It was so cool. “It’s those little things that I think is so cool. SOS takes the time to involve everyone.

I’ve been receiving packages since Day 1, as soon as I enrolled.” The packages sent by Carol Dippon, Annette Riegel, and Marcia Drach are delivered on Christmas, Easter, Labor Day, Veterans Day, Memorial Day, and the Fourth of July. For some, like Leskanich, the packages have followed her all over the world. The Major joined

the Army Reserves in December 2003, went to basic training in 2004, was commissioned as an officer in May 2007, and went to ROTC at Eastern Illinois University while playing rugby before accomplishing her service duties all over the states and other countries. “I’ve always been interested in the military. Both of my grandfathers served in the Korean War, but no one else in my family was in the military at the time,” said Leskanich. “I went to Northern Illinois University for two years and I transferred to Eastern Illinois University. That’s where I started playing rugby. I wanted to check out the military. “I talked to a recruiter and called my parents on a Friday. I said, ‘Monday, I’m going to sign up.’ My plan was to sign up for the Reserves, do basic training, and start drilling with a unit in Terre Haute, Ind., but I also wanted to complete my college degree. “When I met the recruiter, he introduced me to the ROTC (Reserve Officer’s Training Corps) leadership at Eastern. I signed up for both simultaneously. I had no idea that I was going to stay in this long, but the Army has been good to me.” After going to school for 24 credit hours because she had to be a full-time EIU student to play rugby and a full-time nursing student at the satellite school, Lakeview College of Nursing, to continue her ROTC scholarship, she was prepared for her missions as an Army psychiatric nurse practitioner. She was first stationed in Colorado in 2007, deployed to Baghdad, Iraq from Dec. 2008-June 2009 as an ICU and ER nurse, was at Fort Carson in Colorado, and went on a 6-month travel duty assignment at Bethesda, Maryland at the National Intrepid Center of Excellence where she was one of three nurses and one of 15 healthcare workers. Leskanich then went to the Uniform Services University in Washington D.C. for the Psychiatric Nurse Practitioner Program. She graduated in 2015 with her doctorate and took on a residency at Joint Base Lewis-McChord near Tacoma, Washington. She spent time at Fort Leonard Wood in Missouri, deployed to Kuwait, Northern Iraq, and Syria, came back to the states at Fort Bragg for three years, and is currently stationed at Fort Gordon in Augusta, GA as the Chief of Inpatient Psychiatry and Complication Services. “It’s been interesting. I’ve been a few places. I enjoy the job. I like working with service members.

I like what the Army is trying to do with behavioral health,” Leskanich said. “Right now, working inpatient, we are kind of responsive. People become acutely ill, they come see us, and we help get them set up for care afterwards. We try to do collaborative practice after the fact. “One of the new initiatives the Army is trying to do is imbed our psychiatric nurse practitioner in training environments. One of the next positions I’m interested in is where we go to the AIT and basic training units to try to get ahead of things and have it more psychiatric education minded. “If we can help get the skills and help work with some folks earlier to maybe prevent things from getting to the point where folks need acute hospitalizations. While there are programs like this on the civilian side, I enjoy working with this population. I think people come to the military for different reasons, but from a behavior health perspective, I see people trying to get away from something or trying to find their own identity.” Leskanich said she is thankful for her opportunity to help people improve their lives. She realizes helping one soldier advance from young, adolescent behavior to an adult in the service doesn’t affect one person, but many, as the person will then help their family, friends, and everyone around them as better people help make better people. The Major doesn’t ask for anything, but when the SOS packages come,

they help remind her that she is doing what she is supposed to be doing and people appreciate her efforts. At the same time, she is thankful for the smiles SOS gifts bring to her. As she put it, Leskanich might not know where she’ll be next, but she knows the mail will follow her. “I’m taking one duty station at a time and I’m happy SOS packages follow me,” Leskanich said.