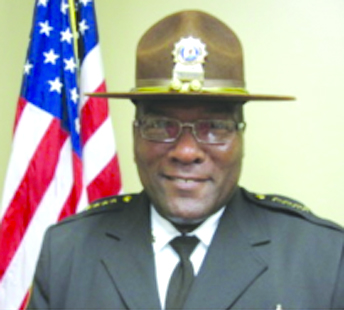 Although Livingston County Sheriff Tony Childress’ term wouldn’t end until Nov. 30, he officially announced his retirement at a county board meeting on Feb. 24.
“I received a really good retirement package I couldn’t turn down,” Childress said. “I decided it was in my best interest to take it and go ahead and step aside, and let someone else fill out my term.
“It was just one of those things where you have things come to you in the middle of the night. Some of them come in the middle of the day. You make a decision as to what’s in your best interest. You go ahead and take it and go. That’s how it turned out for me.”
Childress has been in law enforcement for 31 years and started his first term as Livingston County Sheriff in 2014.
He was reelected in 2018 and has served three years and nine months of this term.
There was a program scheduled in February in which Childress was going to announce he wasn’t running for his position again, but due to unforseen circumstances, it was canceled.
“I have been honored and privileged to serve as the Livingston County Sheriff. I would like to thank all of the people in the county for allowing me to be sheriff. We tried to do a lot of good things and we were able to accomplish a lot of good things.
“When I campaigned in 2013, I promised I would bring Livingston County into the 21st century. We didn’t have computers in the squad cars. We didn’t have a decent cam system for 911. We didn’t even have decent radios.

“We went to Starcom and it turned out to be one of the better things we ever did. We went to a new cam system, which made people in this county a lot safer. It enhanced officer safety as well.”
During his tenure with the Livingston County Sheriff’s Department, Childress introduced new programs for the communities’ benefit.
The Cops 4 Kids Program debuted in 2012 while Childress was an investigator.
He also started the Trick or Trunk Halloween program in which squad cars were backed up to the sheriff’s office and the back ends were decorated. The officers turn the lights on and kids come to the department for candy, popcorn, and other Halloween treats.
Under Childress’ influence school resource officers were added to every high school in Livingston County.
“Many of the things that we did were predicated on officers having good relationships and rapport with the children in this county,” said Childress, who also ushered in four canine officers. “A school resource officer isn’t just an armed security guard in a school. They take on a lot more responsibilities than that.
“In many instances, our officers are teaching the children tips on officer safety, driving safety, and many other things that are aspects of a child going into adult life.
“We want them to be in a sense of mind to where they’re not going out and creating criminal activity or having negative attitudes toward police officers. We want them to have positive attitudes toward police officers and to understand an officer is their friend and is there to keep them safe.”
Childress helped shine the national spotlight on the county as he traveled the Rio Grande River on the Mexican border with the Texas Department of Public Safety as Mexican cartels stood on the opposing coast.
Childress was summoned to the White House by President Donald Trump’s assistants to aide with police reform as he sat with Trump three times in 2019, 2020, and 2021.
“I just want to thank the citizens of Livingston County for giving me the opportunity to serve them,” Childress said. “If I had to do it all over again, I would do it again. I would just try to include more safety things that I wasn’t able to get through.
“It’s bittersweet. I hate leaving. After 31 years, it’s time. It’s time to let somebody else take over and let some different young blood get in there and hopefully do some good things.”
In a press release sent by Livingston County, the sheriff vacancy shall be filled within 60 days by appointment of the Chair of the County Board, with the advice and consent of the County Board.
The appointed individual shall be someone from the same political party (Republican), shall be a registered voter in Livingston County and shall serve through Nov. 30.
The vacated position shall be filled by election in the primary election on June 28 and the general election on Nov. 8.
The chairman will announce the appointment at the March 17 County Board Meeting. Anyone interested in applying for this appointment are asked to submit a letter of interest to County Board Chairperson Kathy Arbogast no later than March 7.

The letter of interest can be sent to:
Kathy Arbogast, Chairperson
112 W. Madison Street
Pontiac, IL 61764