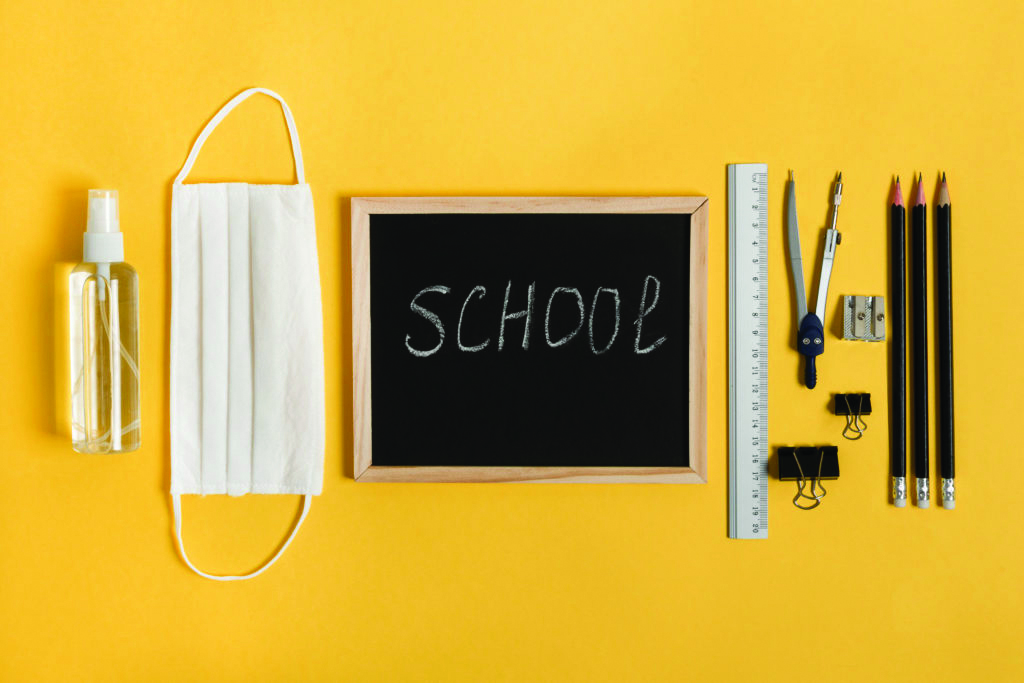 This has been said and written many times: Covid-19 has changed our society.

One of the biggest areas being re-sculptured every second of every day is school systems and how they’re adapting to mandates and policies, national and statewide, to make sure students are still getting a proper education.

It’s not like schools are created on a McDonald’s cook line and are all made with the same ingredients and are the exact same every school you visit.

Instead, there are different intangibles affecting each school whether it be enrollment size, the age of the students, a certain area being hit with Covid more than another, who becomes sick and how to fill their shoes while out, support within the school, and the support outside of the school in the community and parents.

In other words, it has been a lot for the school system and everyone involved to deal with.

“It presented challenges when it first came about. We went remote. On our end, we had prepared beforehand for remote learning, but never for the long term,” said Saunemin Elementary School educator and athletic director, Michael McDermaid. “It was an adjustment when we did that. We strongly feel kids learn best when they’re in the building. We did our best with remote learning, but education is most effective when the students are in the building. There is a lot of social learning that takes place in the building. A lot of kids experience trauma outside of school. If they have tough situations at home and are forced to be out of school, they may be in an environment that’s not as safe as the one we provide in school.

“The kids are much more resilient than I think people give them credit for. We follow the mask policy here and we don’t have any kids giving us grief about it. We laid the expectation out and we’ve stuck to it. We don’t have any resistance on that end. When we go to remote learning, I know it’s tough on the kids and it’s different, but we haven’t had any defiance.”

Saunemin Elementary School hadn’t turned to remote learning after the initial first year of Covid until Jan. 12-14 when it closed its doors for three days because of a high number of Covid cases between the faculty and students.

Gary Doughan, the superintendent at Saunemin Elementary School (Pre-kindergarten through eighth grade), commends his staff, his students, and the community for the support and for making a trying time as smooth as possible.

But it hasn’t been easy as every day sees another change.

“Part of the reason we closed last week was because of staffing issues. That’s been the biggest challenge. If I have a staff member get sick, it is hard to cover,” Doughan said. “We have some substitutes who are regulars in the building, but when they get sick it becomes an even bigger challenge.

“The staff has been amazing. They’re making sure kids are getting what they need in the classrooms. When they get sick or when the teacher’s kids get sick, that creates a challenge. A lot of the staff members are also parents and have to be out with their own children if they get sick. It’s definitely problematic. We’re like any other district where it doesn’t take much before trying to cover a classroom becomes a puzzle of who do I move where to make sure everybody is covered and all the children are supervised.”

Although E-Learning has had its fair share of issues, Doughan believes digital learning has become an asset even though it was forced on schools due to the pandemic.

The dog-ate-my-homework excuse is being heard less and less as digital material is slowly replacing bookwork and paperwork.

“On a day to day, before Covid, there was a lot more book work, paperwork, and intangible activities. Those are still going on, but I’ve seen a lot of my junior high teachers and some of my upper elementary teachers embracing the digital part of teaching,” Doughan said. “Our teachers are presenting material, even in the classroom, digitally so that the students are not tied to a textbook or a worksheet. They can access it through Google Classroom and the platforms that two years ago, when I started, we weren’t utilizing.

“Even if a kid is only out one day, they know where to go to find the missing work. They’re not waiting on the teacher to give them a worksheet they missed in class yesterday, they can just find it and complete it. Teachers and students have both adapted to that work being accessible digitally. I think it already has. I think it solidifies that this brick-and-mortar institution is still very necessary. I know there is a lot of information that can be found online. Our work can transition to digital. But, the social aspect is lost. Schools are hugely important.”

Richard Decman, the 11th-year superintendent for Herscher’s four schools which hold 1,800 students from pre-kindergarten to senior year of high school, is seeing a little bit of everything.

Herscher’s philosophy through the pandemic has been to do whatever it can to keep the doors open to educate students.

However, Decman and his staff have had to put up a good fight as staffing issues, a spike in Covid cases after Christmas, and some parents haven’t made their jobs easier.

“Staffing has been extremely difficult because we have had faculty out due to Covid and other reasons. This is a struggle our principals deal with on a daily basis in any given year, but especially the last couple of school years,” said Decman, who hasn’t been forced to shut down any of the Herscher schools during the last two school years.

“That would be the major thing that would shut us down if we weren’t able to staff our buildings. “Fortunately, the most concern we’ve had has been with bus driving because we’re a large rural district. We have almost 40 regular routes on a daily basis with a staff of 75 bus drivers. We don’t have a lot of give there.”

Herscher has been able to fill spots, but maybe not by the most qualified person. Anyone who can help has been asked for assistance.

“We’ve had principals sub in classes at any given time when needed,” Decman said. “A couple of us went back and got our bus driver’s license, myself included. I can drive a bus now. All of us have driven routes. We’ve had paraprofessionals and custodians answering phones.

“Everybody has chipped in to keep us afloat.”

Although everyone in the school has seemed to work together, it isn’t the same outside the institution doors.

“Within the district, we’ve been brought together to make sure children are being educated. Most people are trying to work together to keep schools open for kids. Politically speaking, the approaches to Covid have been quite divisive,” Decman said. “We absolutely have had some backlash. You can say that in any year, but we have a group of parents that don’t like the mask policies. They’ve been to board meetings to protest them and anything else that has to do with Covid. We have the other extreme, I’ve had folks tell me we’re not doing enough. You have the two extremes and our philosophy has been to keep the school open but do as many precautions to keep the students and staff as safe as possible.

“We have appealed to people and told them, ‘Hey, we’re professionals.’ Kind of like the postman, the mail has to go out rain or shine, we’re going to have kids come to school. We want kids here and they’re going to come, so we have to be professional and keep on teaching kids as we have in the past. We’re very fortunate most of our folks have helped us with our goal to keep the doors open. I think our kids in the long term are going to benefit greatly.”

The mother understands the circumstances the education system is facing and accepts the school is trying to create some normalcy during a time no one knows what normal is.

“With everything that has been going on and the countless changes that not only us, but families have to face, our school systems are facing those same challenges, but at a much larger scale,” Alexander said. “I couldn’t even begin to imagine the difficulty and frustration our educators face daily with policy changes and trying to reach their students through a phone or screen the same way as a classroom.

“I feel that the Dwight Common School handled and continues to handle the situation well. During remote learning, teachers provided an abundance of information and were hands-on through the computer screen as often as students needed. The school kept us informed and remained user-friendly.”

Austin McDowell – a teacher, baseball coach, and athletic director at Gardner Grade School as well as an official – has tried his best to adapt to remote learning although he is not tech-savvy.

Through 10 years of his education career (six years at Gardner), he has never gone through some of the issues he has the last couple of years.

“Just like everything else with Democrats and Republicans, half believe in the masks and the other half doesn’t. That’s one of the difficult things. The students I have – sixth, seventh, and eighth grade – they do a pretty good job with the mask policies,” McDowell said. “As far as the classroom, our staff has done a great job of using Google Classroom and having live-stream videos with students for the kids that are out.

“It turns into a whole new ballgame, so you have to do about twice as much work for students that are at home and in class. It’s made my job a little more stressful.”

Being an athletic director, he’s seeing changes on the field and in the gym, too.

“Half of the parents walk into a game with no masks on and the kids playing usually have them below their chin. It’s kind of a lose-lose situation, but it is a difficult thing for sure,” McDowell said. There have been a lot of discussions between myself and the administration and we’ve definitely battled at Gardner Grade School.

“Our softball team was down for a couple of weeks. All of our basketball programs have been shut down for at least two weeks at one point this year. It’s made it difficult, but we’re doing as much as we can to prevent it and at the same time still allow the kids an opportunity to play. As an athletic director, I’m in the middle of teaching class and I’ll get a message saying my game has been canceled. It’ll say, ‘There is no junior varsity game, it’s only varsity.’ Then you have to call and cancel referees and buses. Then you have to reschedule a conference volleyball game. It’s been pretty constant for two years now. “It is definitely stressful.”