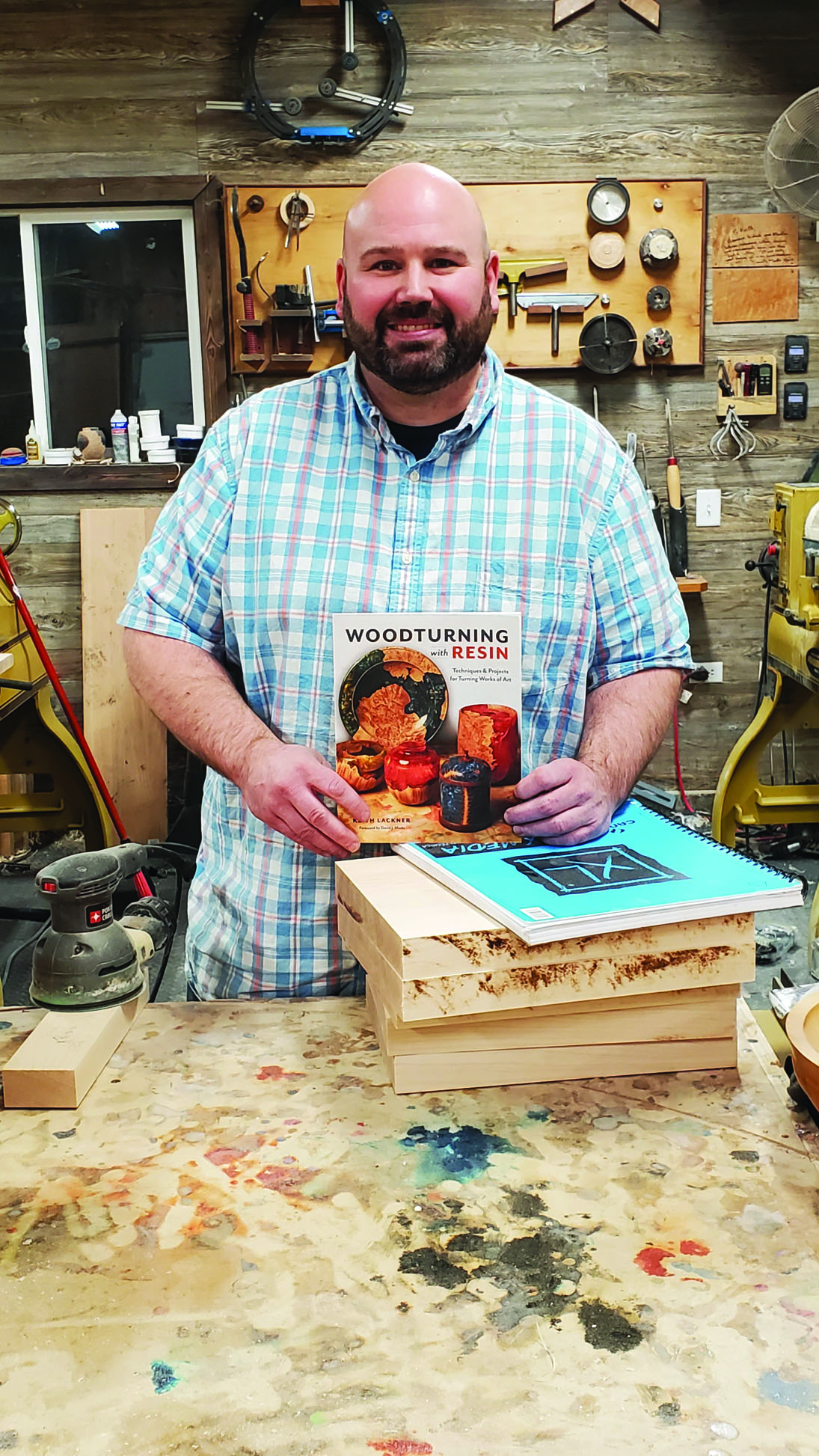 ‘Woodturning with Resin’ Set to Reprint

When Keith Lackner’s book, “Woodturning with Resin,” was published in April, the Dwight resident thought he might sell 300 copies.

“They called me a month ago and said, ‘We sold the first run of 5,000 copies and we’re going to do a reprint of 5,000 more copies,’” said Lackner, who has been turning wood since his days at Dwight Township High School (Class of 1994). “People call and email me about the book. They’ll call and ask, ‘On Page 47, can you help me with this?’

“It’s cool that people take the time to read the book and ask me questions. I had zero writing experience before this. It was a challenge. I had to do it though. When in my lifetime am I going to get another opportunity to write a book? There are craftsmen who are the absolute best at what they do and some of them don’t have a book.”

The supervisor at Vactor Manufacturing in Streator, furniture maker, private woodturning teacher in Kansas City, and everyday woodturner, has been floored with the success of his book and how his name is associated with resin.

What started as a passion from watching WoodWorks with David Marks on TV, escalated into talking with Marks over the phone, flying out to California to work with him, having his number in the cell phone’s contact list, and Marks asking Lackner if he could write the foreword in “Woodturning with Resin.”

Resin, which was not known as a power player in the woodturning world, became Lackner’s main priority on his second trip to Marks’ home when he met Mike Mahoney, another big name in the woodworking business.

Lackner has now helped spread the word of how resin can transform a piece of wood into a work of art.

“There is an A and a B. You mix the two together and a chemical reaction happens,” said Lackner, who has done demonstrations and sent books to the United Kingdom, Israel, and Australia as well as all across the United States. “It starts to heat up and it turns from a liquid to a solid. Once it turns to a solid-state, it cannot be reversed. It’s then a solid and you can’t break it back down. You pour it over the wood. You can color it. You turn it and at that point, it’s a structural mass and safe to keep turning. You can turn it and do whatever you want with it.”

“A lot of people look at my work and wonder how could I make a living off of this, or they wonder how I can sell pieces for $2-, $3-, or $10-thousand. I sell one of those every three years. To pay the bills and to pay for all of my equipment, I’m a production turner meaning we do platters, bowls, and salt and pepper mills; anything I can knock out fast.

“During Christmas, I do resin snowmen. It’s half resin and half wood. You knock those out and you can make $5 thousand in a couple of weeks. That’s what pays the bills. When we go to big shows, that’s when I show off the art.”

Lackner has been featured in four magazines – three times with a woodturning magazine in the UK and one with Woodcraft Magazine – before he was asked to write a book.

He quickly learned it was an entirely different process. He spoke into a Yeti Microphone as it transcribed his words into text and he spent months going back and forth with editors perfecting the book.

“I had done magazines before and I teach woodturning with resin all over the country,” Lackner said. “I have this format in my head, but when I was approached to do a book, it really floored me. I was so excited, I called David Marks as soon as they asked. David said, ‘I’m David Marks and I don’t have a book.’

“It was huge for me. I called everyone I knew. My feet didn’t touch the ground for probably a month.”

He is now having the same issue with his feet not touching the ground with the 5,000-copy reprint.

Although he didn’t understand why he had to re-edit a book that already sold four-digit copies, he was more than happy to keep his knowledge of the craft floating to the next person excited about turning wood.

“Woodturners are the best people out there. We don’t have secrets,” said Lackner. “We want to give all of our knowledge out to people. I’m glad the book is doing so well because there are so many people that I’ve influenced. They bought the book and they’re going to pick up this hobby and do their own thing with it.

“The reprint of this book means there are more people out there who are getting into it. Hopefully, the person who buys the book learns a lot and then passes the knowledge onto someone else. Many, many, many moons from now when I’m gone, the book is going to live on and my work is going to live on. I didn’t want the book to sell 100 copies and just die. It’s doing well and it’s passing on woodturning.”

With all of his woodturning endeavors and locations taking time, Lackner and his wife Jessica Lackner (official as of Sept. 4, 2021) have not had time to take a vacation. Or a honeymoon.

The success of the book will make their planned getaway in February gratifying.