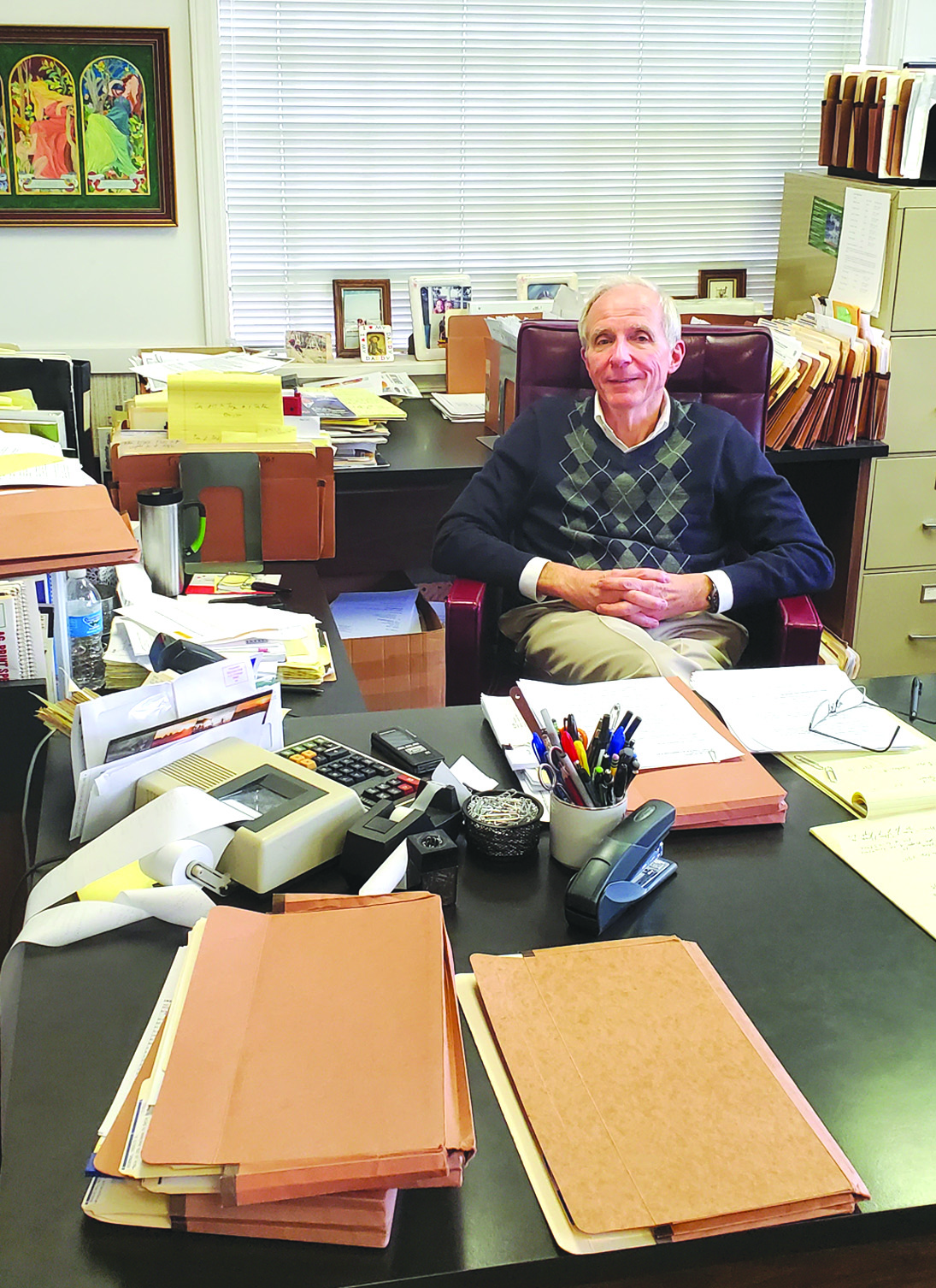 Countless trains have traveled the tracks.

Many businesses have opened their doors, some have closed and some still flip the open/close sign or turn on and off the light switch daily.

Buildings have changed, technology has advanced, different government officials have been sworn in and resident’s family trees have expanded.

Irv Masching, Dwight’s Village Attorney, has sat at his desk in his office on 105 East Chippewa St. in Dwight since 1981 to witness it all.

“It’s refreshing to see democracy at the ground level,” Masching said. “Our national politics are a wreck right now, but at the local level there really isn’t Democrats or Republicans in a small town. There are, but it’s not the motivation. The motivation is when citizens turn on the water, the water turns on. The garbage is picked up and the sewer works.

“Those are really the nuts and bolts of small town government and democracy. If you know you’re neighbors, then you know police officers, fire fighters and people of other important roles. It’s nice to see that. People just want things to work right, it’s not based off of philosophy and whether you’re right or left.”

Masching’s view of the world may not change, but where he sees it from will be different since he is retiring as Village Attorney Nov. 30 and is ceasing all law practice Dec. 31.

Masching, 71, who grew up in the Dwight area, graduated from Valparaiso University in 1975 and became a lawyer in Dwight in Oct. 1975, 46 years ago, after passing the bar exam.

“I was kind of interested in history and the founding fathers and when they put together the Constitution,” said Masching. “There was a case where President John Quincy Adams thought he had John Marshall in a trap because he thought Marshall was going to rule against him. His reference was, ‘Let him enforce it if he can.’

“What Marshall did was he said the law was unconstitutional. It didn’t give John Adams a reason to do anything. But what it did was expand the court’s power to say it had the right to review laws and determine whether they’re constitutional or not. It greatly expanded the rules of the judiciary by accident. I also probably watched Perry Mason a few times.”

When his career started, he was stationed in the old village hall building beside the Dwight Water Tower in the days when smoke clouds circled the ceilings and stuck to clothing as soon as a person entered a room.

Masching, who has been the Village Attorney for 38 years (non-consecutively) of his 46 years of practicing law, chuckles when he remembers his wife Lynn Masching hanging his suites on the back porch so the stench didn’t infiltrate the Masching home.

In 1981, Masching caught his current view for the first time as he moved to the East Chippewa address and began his sole practice.

“I stuck with it. I was born and raised in the Dwight area and then I came back here,” said Masching, who served on the Dwight School Board for 25 years and was the president for a majority of his tenure. “I went in with an attorney who was here at the time and then I went in on my own in 1982. I have been a sole practice since.”

“At one time did some trial work, but I don’t do much trial work any more. I do some real estate, probate and business law for people. Some of the court contested matters, over the years it just got to be where it wears on you. It’s a tough way to make a living. People do well and enjoy it, but I just didn’t feel like fighting all of the time. I decided to do more of an office practice. Real estate transactions and buying, selling farms and such matters may mean going to a bank or to a title company to close, but it’s not going to court.”

Along the years, the lawyer has worked many cases of all varieties. Some were rewarding and some were tough to take on whether it was the type of case or the surrounding elements.

“Some things that were kind of nice were when an adoption worked out well. That was a nice thing to do, getting families together,” Masching said. “I used to do divorces, but don’t do that anymore. You have two people who are not getting along and it usually doesn’t get any better through the proceedings. Usually there are kids involved and sometimes parents put their own intentions in front of the kids, whether intentional or not.

“You can have a good case but a bad client, or you can have a good case with a good client. There may be a judge where sometimes, it’s nothing personal, but they see things differently than you do. That’s not criticizing the judge because they’re like everyone else and have opinions. Sometimes if you have a client who gets on the stand and seem like they’re not being honest, even if not telling a lie. Sometimes judges latch onto that subconsciously. We all try to be fair but we have our prejudices.”

With this said, Masching adapted to working at the office a majority of the time instead of standing in front of a jury.He knew what he was good at and how he could help his clients the best.

“I’ve seen some things, but I have not seen it all. I never tried a murder case,” Masching said. “I never had a big case, but I did a few civil trials. That’s not my forte. I never wanted to do a murder case or a big trial. If someone came to me for one, I’d tell them they would need someone well versed in criminal law. Especially in a murder case where years ago there was a death penalty and you don’t want to screw those up.

Whether it be the wars in the courtroom, the abundance of paper work and files on the computer-less desk – computer work is dictated to assistants Lynn Cain and Janice Lauritzen – or the amount of time preparing and finishing cases, Masching sees the righting on the wall. It is time, to close the long written law chapter of his journey.

“In part because being in a sole practice, if you were to get sick or injured, you kind of leave your clients in a lurch,” Masching said. “If you were to die or to get killed in an accident, there would be cases going on and left open for someone else to take care of.

“I decided to get out on my own time so I could finish client work and do it in a right way. At 71, I’m in good health and so is my wife, Lynn, but we both have worked hard for quite a few years. I’ve known people who worked for a corporation or the government and they’ve been retired for 15 years. They’re in Florida and I’m here working in the winter. It’s just a matter of you never know how long you’re going to be healthy to be able to do things in retirement.”

Irv and Lynn Masching, who have three daughters in Alexandria “Alex”, Lauren, Grace, realize it’s time to finish what they’ve started outside of their professions.
The great outdoors and a new chapter is calling.

“One of the things Lynn and I have been doing the last several years is we are trying to go to all of the national parks,” Masching said. “We’re kind of into hiking and that kind of thing. We want to get to all of national parks. We’re in good health and I think we can go see all of them.

“There is 63 of them and there is a new one in West Virginia. We have been to some of the bigger ones and they really are the crown jewels of America. Nature is really astounding sometimes. I remember looking over the Grand Canyon in late fall or early spring and it started to snow. The rocks are coral colored, the sun was shining and snow was falling. It was absolutely gorgeous.”

“I’ve been working 50-60 hours a week for my entire career. I’ve thought about retirement and realize that is a lot of hours to fill in a week. I’ve also talked to some people who have retired and they say, ‘You know, it’s pretty easy to fill the time. You can do things you’ve always wanted to do that you never had time to do.’”

The trains will still come.Businesses will still open and close.Expansion of family trees will continue.Masching will just be viewing from a different location.

“I’ve been looking out these windows for almost 47 years down Main Street and have seen a lot of things change. Some businesses are gone and some have come,” Masching said. “This has been the desk I’ve had the whole time. I never saw a reason to change it.

“At some point you just get used to the train.”