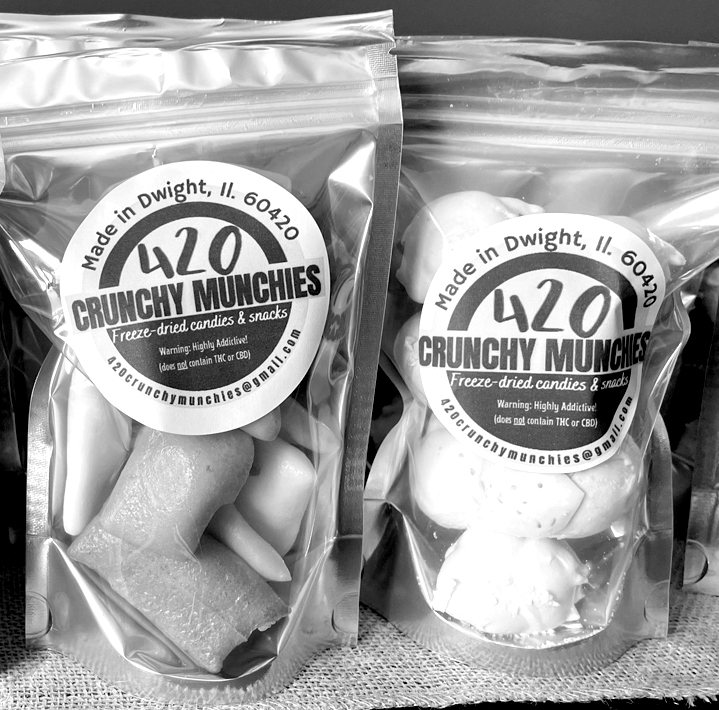 While hunting for interesting items at farmer’s markets in Livingston County, you may have noticed something unique.

Meagan Houdek, 35, from Morris and has lived in Dwight for the last five years, is offering freeze-dried candy under her brand 420 Crunchy Munchies.

“My daughter (Leona) saw the idea on Tik-Tok and she wanted me to order some freeze-dried Skittles. I ordered them and we ate the entire bag in one sitting,” Houdek said. “I thought, ‘Man, these are so expensive, how do I make these.’ So, I looked it up and bought a Harvest freeze dryer because Harvest is the only company that makes them for your home.

“I bought one of those and started freeze-drying candy. I try all kinds of candy; any that will freeze dry. Chocolate and honey can’t freeze dry because they’ll just melt. You can do Milk Duds because of the caramel. There is only a little bit of chocolate on the outside. They just melt in your mouth.”

However, it was the original Skittles that started the thought process behind the business model. “After I tried Skittles, I thought ‘I’d like to sell these,’” Houdek said.

“I did some brainstorming of what would be a good idea. Since they’re crunchy, people get the munchies, and 420 is in our zip code it seemed to work. Illinois has legal marijuana laws, so I thought people would be OK with it.

“I thought people would like the 420 name in Illinois. The number goes with munchies. The name seems to attract people.”

Houdek has been with her husband Shaun for 18 years and officially married for 10. After Leona (the 14-year old Tik-Toc advisor), the couple had Lidia (10), Roland (7), and Charlotte (4). The last 10 years have featured Shaun as the money maker and Meagan as the stay-at-home mom.

With the creation of 420 Crunchy Munchies, Meagan can take care of her children and help financially at the same time.

“I like showing my kids that even though I’m a stay-at-home mom, I can do something else,” Meagan Houdek said. “I take them to the market sometimes. They like talking to different people about freeze-dried Skittles. They help with the process. They like to put the stickers on and eat the candy, of course.

“I have to hide it. I have my stock to put into the freeze dryer and my candy already made in big tubs. They’re all hidden.”

Hiding the candy may be the most difficult part of the process. The setup, clean up and selling phases are simple and not messy.

“I put the candy on trays and then the trays into the freeze dryer. It freezes the candy to -40 degrees and it sucks out all the air because it’s a vacuum chamber,” Houdek said. “It slowly heats it and then it turns into water vapor. The water vapor sticks to the outside of the chamber. It slowly takes out all of the moisture as it heats up. The vacuum chamber is what makes it poof up.”

Houdek bought the freeze dryer in July. Since the initial test runs, she has been selling the candies in Mylar Bags with windows for $6. Christmas will see 420 Crunchy Munchies in mason jars for $12 and $15. The latter will include a straw and a lid to turn the jar into a cup.

This is cheaper than the $10-14 she paid for the Tik-Tok inspired bags she bought. “The reception has been pretty good. Facebook (420 Crunchy Munchies) and advertising where you’re going to be for the next market,” Houdek said.

“With Cottage Food Laws you can only sell at farmer’s markets right now, but next year I can sell from home because they signed The Room to Market Act. I’ll be able to sell from home, online and other markets like craft fairs.”

To sell her product at farmer’s markets, Houdek had to acquire a Cottage Food Permit from the Livingston County Health Department and a Certified Food Protection Manager License from Illinois, which included an online test.

The candies can not be sold in stores until she has a commercial license.

With the knowledge of where Houdek could sell, the next question was could she sell without any legal ramifications of trademarked companies such as The Wright Company (Skittles, Starburst), Perfetti Van Melle (AirHeads), and Nerds (Nestle).

“It’s been fun. I like seeing people’s initial reaction when they take a bite out of freeze-dried Skittle. I’ve heard, ‘Oh wow, this is great. I like this better than a regular Skittles.’ I love giving out samples at farmer’s markets and getting their reactions.”

Houdek and 420 Crunchy Munchies has been at farmer’s markets in Dwight (including Harvest Days) and Pontiac and will be at the French Hens Market at Jennifer’s Garden in Morris on Nov. 19-20. As Houdek would say, come try the ‘chewy candy turned crunchy.’