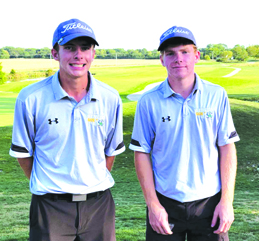 Seneca green and white was represented at both Saturday’s girls and boys IHSA State Meets by seniors Rylee Stenzel and Noah Quigley.

Stenzel shot an 81 to tie for 29th place during Round 1 and followed it with a 75 to earn her 20th at Red Tail Run Golf Course in Decatur.

“It was great. It took me a while to qualify but I finally got there,” said Stenzel who made it to sectionals as a freshman and a sophomore but never played at state. “I’m not really sure what was different than the previous years. I’ve played on the boys team for the last three years, so that helped.

“I feel like I had a better mindset and I had a swing coach this year that I haven’t had in the past. Whenever I messed up, he was there to help me and it was nice. I had a different plan than I had the last three.”

Stenzel advanced after helping Seneca finish second as a team at the Class1A Seneca Regional and then shot a 74 at the 1A Aurora Central Catholic Sectional to be the second individual not on an advancing team to qualify.

“I am very happy I got to that point. I feel like I could have done better during Day 1 and it could have put me in a better position, but I’m happy with how it ended,” Stenzel said. “I really try to not have any expectations because I feel if I do there is a bigger chance I could be let down. I always go in with an open mind to accept whatever happens. The first day didn’t go great, but the second day I played my game.”

Quigley had never made it out of regionals, but his 78 at the 1A Seneca Regional advanced him to the 1A Beecher Sectional, where he shot an 81.

“It was kind of exciting. I was playing really well at sectionals,” Quigley said. “I cut it close those last couple of holes and I wasn’t sure if I was going to be moving on. They announced the Top 10 and I just squeezed in to advance.

“I was a little shocked. I wasn’t expecting to go, but it made me feel like I’m compared to all the other golfers and right there with them.”

Quigley shot an 86 during the first round at state’s Prairie Vista Golf Course in Bloomington to miss the cut by three strokes.

However, he enjoyed every second of becoming a state qualifier.

“I felt like I knew the course pretty well after the practice round the day before,” Quigley said. “I had a rough start and tried figuring it out as I went around the course. The people and the environment, it was all exciting. I couldn’t have dreamt about a better weekend.”

Besides hitting the greens at state, Quigley experienced another amazing moment during regional when he and his twin brother Own both advanced.

“He played really well at regionals. I know he wishes he played better, but it was a lot of fun to have him there,” Noah Quigley said. “He came to state and watched me play.”