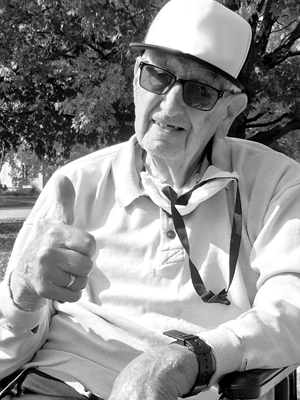 Robert B. Allen, Sr., age 96, of Joliet, Illinois passed away Monday morning, October 11, 2021 at Heritage Health of Dwight. Born February 8, 1925 in Braceville, Illinois, Robert Brighton was the son of Charles and Josephine (Giaudrone) Allen. He was raised in Braceville and graduated from Gardner – South Wilmington High School with the Class of 1942. Following graduation, Bob was attending University of Illinois College of Engineering at Urbana before enlisting in the United States Navy on February 5, 1943. He honorably served through the conclusion of World War II, and was discharged on May 30, 1946. Upon returning home, Bob immediately went to work for the family business, Allen Bottling Company, which his grandfather, George B. Allen, founded in 1924. The company in which he went on to own and operate bottled and distributed Orange Crush, Squirt and Schweppes, to name a few brands. In addition to taking Bob to every neighborhood, back alley and back door of restaurants and taverns throughout the greater Chicagoland area, it also allowed him to travel internationally on behalf of the company. Bob’s memberships included Moose Lodge #300, Joliet Elks Lodge #296 and American Legion Post #1080. He was a member of St. Paul the Apostle Catholic Church in Joliet, and enjoyed being a gentleman farmer in Grundy County. Bob loved golf, and in his retirement worked at Heritage Bluffs in Channahon, as well as could be found at any time driving around with various sets of clubs in his car. Survivors include his six children: Robert B. Jr. (Sheila) Allen of Mazon; Larry (Laurie) Allen and David (Jacque) Allen, both of Carbon Hill; Kathy (Sam) Cindrich of Wilmington; Charlie Allen of Braceville; and Andy Allen of Atlanta, Georgia. Also surviving are 13 grandchildren:  Bart, Ben, Luke, John, Brad, Ryan, Kate, Nate, Jill, Kevin, William, Arianna and Ava; 18 great-grandchildren; and numerous nieces and nephews. Bob was preceded in death by his parents; wife, Irene, on June 18, 2017; one grandson, Joshua Allen; and his sister, Jacqueline Born. The family will receive friends for a visitation at Baskerville Funeral Home, 700 East Kahler Road in Wilmington on Wednesday, October 13, 2021 from 10 a.m. until the time of service at 12 noon. Rev. Sebastian Gargol will preside, assisted by Deacon Jay Plese. Burial with full military honors will follow in Abraham Lincoln National Cemetery in Elwood, where Bob will be laid to rest with his late wife, Irene. Bob’s children will be pallbearers. Preferred memorials may be made as gifts in Bob’s memory to the American Legion Post #1080, 2625 Ingalls Ave., Joliet, IL 60435. Family and friends are encouraged to sign the guestbook, upload photographs and share Bob’s Memorial Page online through social media by logging on to: www.BaskervilleFuneral.com/obituary/Robert-AllenSr Funeral services and arrangements have been made under the direction and care of Baskerville Funeral Home in Wilmington. (815-476-2181)