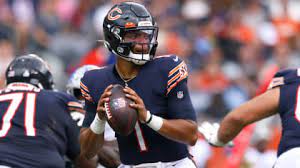 The Bears rebounded from their week three loss to the Cleveland Browns by beating the Detroit Lions 24-14 on Sunday. The offense looked much improved in their performance, scoring on both of their possessions in the first quarter.

Bear’s rookie quarterback Justin Fields looked very impressive on his second start of the season. Fields went 11/17 for 204 yards passing and one interception.

The effective air attack led to Bears wide receiver Darnell Mooney having a big game with five receptions for 125 yards. The Bears also ran the ball effectively as well, with all three touchdowns scored on the ground. Bears running back David Montgomery had 106 yards on 23 carries and two touchdowns on the day.

The Bear’s defense also had another great outing as they kept the Detroit Lion’s offense at bay. The Lions were scoreless in the first half. The Bears sacked Lions quarterback Jared Goff four times on the day. This pressure caused the Bears to capitalize on turnovers, with two fumble recoveries on the day.

In the second half, the Lions mounted a comeback in the third quarter. Scoring a touchdown with three minutes to go in the third quarter, down 7 to 21. The Lions then scored another touchdown at the beginning of the fourth quarter to go down 14 to 24 after the Bears scored a field goal. However, the comeback was too late as the Bears held on to a 24-14 win.

After the game, Bears head coach Matt Nagy revealed that he gave up playcalling to offensive coordinator Bill Lazor. Nagy also reaffirmed that when Bears quarterback Andy Dalton is healthy, he will be the starter over Fields. Despite Field’s impressive performance against the Lions.

Saying, “Dalton is the starter, Justin is number two, Nick (Foles) is three.”

The Bears look to have two consecutive wins next week against the Las Vegas Raiders. The Raiders lost to the Los Angeles Chargers 28-14 on Monday. The Raiders are now 3-1 on the year and are looking to keep their lead in the AFC West.

It is still unclear who will be next week’s starting quarterback for the Bears; as they enter the toughest stretch of the season. Whoever it is, the Bears need to find out what their plan is. The Bears are currently sitting in second place in the NFC North behind the Packers, and can easily fall to third place this season.