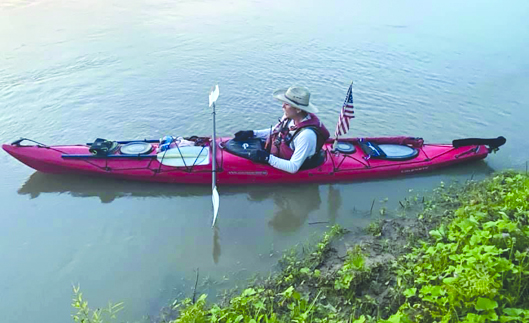 Pontiac Resident Lives Out His Dream of Paddling ‘America’s River’

Before every summer there are plans made. Activities we want to do and people or places we want to see with the hopes of the fun gauge reaching the maximum. Dan Faust shattered all of his fun meters and capped off other measurements such as miles traveled per day on a kayak as he engulfed in his longest paddling trip ever – the Mississippi River. “I started paddling when I was about 11. I did my first canoe trip with the boy scouts and I just fell in love with it,” said Faust. “I’ve been paddling ever since. As I became an adult, I got a little more into it and really sought out more education for myself. I went to an event in Madison, Wisconsin called Canoecopia in 2003. It’s in March every year. “They have vendors with boats, life jackets, paddles and anything you can think of canoe or kayak related. They have speakers from all over the world who come and share. Just by chance we decided to listen to one guy, Byron Curtis, who wrote a book called ‘Bluffs to Bayous’. I was really captivated by his presentation. I bought his book, chatted with him for awhile and it planted a seed in my head to paddle down the Mississippi River. I’ve been thinking about it ever since.” Faust, 63, who lived in Cullom until the fourth grade, Dwight from fifth grade through high school, and has resided in Pontiac the last 22 years – feels he has been training for this summer’s trip his entire life. He began camping outdoors before he began to paddle when he was 11. Faust may not participate in every outdoor activity, but he’s spent a majority of his life under the sun instead of under a roof. He needed this experience of Mother Nature for the Mississippi River trip. Faust started his adventure in his 14½-foot kayak called the Tsunami 145 on May 29 at Lake Itasca, Minnesota and finished July 31 at Burns Point Park in St. Mary Parrish, Louisiana. His path down the Mississippi was 2,125 miles. Through the northern sections of the river he traveled 35-40 miles per day, while below St. Louis, he picked up the pace to 60 miles per day. For the whole trip, he averaged 33.2 miles per day as he completed his objective in 64 days. “I had a goal of doing it in 63 days because I’m 63 this year, but I missed it by 11 hours,” Faust said. I figured that was pretty good, close enough. I retired last year and decided it was time to do it. I kind of wanted to see if I was up for the challenge and to see if I could do it.” Learning about the trip in 2003 and officially retiring weren’t the only reasons he finally decided to paddle the Mississippi. His mother, Patricia Faust, passed away five years ago and it changed him a little bit. He

continuously thought about the things she put off and never got to do during her life. He realized he was doing the same thing and wanted to enjoy life’s pleasures while he could. With only two thunderstorms where he had to leave the water, Faust was happy with his trip and glad he checked it off of his bucket list. “It far exceeded my expectations. I wouldn’t say I’m a great outdoorsman but I’ve been doing things outdoors my entire life. I live on the Vermillion River in Pontiac – it’s literally my backyard,” Faust said. “I bought the house here because I love to kayak and be outside. So, I knew if you go outdoors and you’re going to be there for 60-plus days that there is going to be bugs, you’re going to have to deal with weather. It’s going to be hot or cold. It’s going to rain. “I got super lucky. I don’t know what it was about the bugs, but they weren’t bad. Around dusk you need to put on bug screen. I did that every night. It wasn’t a problem. I got very few bug bites. Normally I don’t wear shorts or go shirtless. I could walk around camp (continued on page 7) in under shorts and I didn’t have any worries with the bugs. I didn’t have any animal encounters. “It was remarkable. I expected tough times, but everything just seemed to go my way.” It’s surprising how many items a paddler can fit in a kayak. In Faust’s kayak he would carry: a hammock to sleep in, a tarp to go over it, sleeping bag, few extra clothes (set while in kayak, set of sleeping clothes, set of clothes to wear into town), twig stove, fresh water (eight 2 ½ liter old soda bottles filled with water which lasted about seven days), two weeks worth of food, spare paddle, umbrella, small one-person tent (used it twice), solar panel and battery packs to keep phone, radio (marine radio carried on his life jacket) and tracking device charged up. Everything fit inside the kayak except the umbrella and the solar panel, which was always on the deck of the kayak to charge all batteries during the day. Faust camped overnight for 46 of his 64-day voyage, while he stayed inside 18 nights. “I mostly camped, but I did stay at hotels. I researched a lot because that’s just how I am,” Faust said. “About a year to 1 ½ years before I actually planned to do the trip (which was last summer, but postponed due to Covid-19), one of the things that came up was I haven’t been away from home, my family and my friends since I went to trade school in Indianapolis right after high school. Back then I remember I

got really home sick. I got so home sick, I thought I recognized people I knew from back home. Most of the time it wasn’t someone I knew. “I was worried I was going to get home sick on the river. I told my family about it, they were great and they took it upon themselves to meet me on the river about every two weeks. About every two weeks I took a break by staying at a hotel with them. I’d get cleaned up, get a shower and lots of good food. It was kind of nice.” Carol Faust, Dan’s wife of 40 years, and daughter Jennifer (17) traded off the every two-week visits with Dan’s younger sister Melody and husband Rick Radmacher. This gave the paddler time to eat tons of food, sleep in a bed, give the water a rest and visit family to detour homesickness. “I took quite a few 0 mile days. My sister Melody and her husband Rick met me in Cape Girardeau and I took two 0 days there because we wanted to sight see,” Faust said. “I got a little more rest and put a little more food in my belly. My sister was worried I was going to lose a lot of weight. “I lost about 14 pounds by the time I got off of the river. That wasn’t too bad. A lot of people my size (5 foot-10 inches, 180-200 pounds) will lose 30 pounds. I did the trip fairly quickly and I ate like a horse every chance I got. When I’d go to a restaurant, I’d basically eat two meals. It was fun because I could eat whatever I wanted. I usually have to watch what I eat and stay away from high calorie and fatty foods. I had 64 days where I didn’t have to worry about watching what I eat. I didn’t eat a bunch of junk food, but I ate what I wanted.” Jennifer told her father about a stop at the hair salon before seeing him along the Mississippi. When asked what she was doing for the summer Jennifer told the stylist she was going to visit her father who was paddling down the monster river. The stylist answered immediately, ‘Is your father Dan Faust?’ She had been following his Facebook page where he updated his trip. Faust’s amazing summer adventure is going to be something him, his family and the community will never forget. “Everybody has to do their own trip. Some people like to do a lot of sight seeing and others like to do a lot of camping. I personally just love being in the boat on the river. I’ve always loved rivers,” Faust said. “I’ve learned to appreciate ponds and lakes, but rivers just have a special place in my heart. “In America, the Mississippi River is like America’s river. It’s part of our history. It’s sort of part of our identity. It’s one of the most famous rivers in the world – kind of like the Nile or the Amazon. I just wanted to get out there and paddle it.” Brandon LaChance can be reached at (815) 876-7941, blachance20@gmail.com or on Twitter @LaChanceWriter.