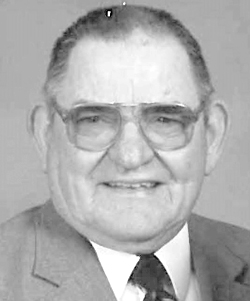 John Henry Ulrich, 97, of Pontiac and formerly of Campus, Illinois passed away at 6:25 a.m. at Accolade Nursing Home in Pontiac on Wednesday, September 1, 2021.
Funeral services will be at 2 p.m., Thursday, September 9, 2021 at Hager Memorial Home in Dwight, Illinois.
Visitation will begin one hour prior to the services, also at the funeral home.
Burial in Round Grove Cemetery, rural Campus, Illinois will follow the services.
Memorials in honor of John may be made to the First United Congregational Church of Christ in Dwight, Illinois.
Hager Memorial Home in Dwight, Illinois is in charge of arrangements.
John was born in Campus, Illinois on June 30, 1924. He was the son of Louis H. and Louise (Rieck) Ulrich. He married Dorothy Richie in 1945, and later married Ruth Larsen on January 5, 1974 in Emington, Illinois.
He is survived by daughter, Virginia (Maurice Collins) Webb of St. Louis, Missouri; stepson, Bob (Terry) Sargent of Pontiac, Illinois; 10 grandchildren; many great-grandchildren; great-great-grandchildren; and nieces and nephews.
He was preceded in death by his parents; wives; brothers, Lester Ulrich and Alvin Ulrich; sisters, Louise Smith and Beatrice Davidson; and granddaughter, Haley Webb.
He was a longtime member of the First United Congregational Church of Christ in Dwight, the National Rifle Association, the Illinois Rifle Association, the Pontiac Moose Lodge, the Danish Brotherhood, and the VFW Auxiliary. He also volunteered at St. James Hospital in Pontiac, Illinois for many years.
He will be remembered by his friends and loved ones for making his own wine and his love of fishing.

Online condolences may be made at Hagermemorial.com