Mead on the Rise 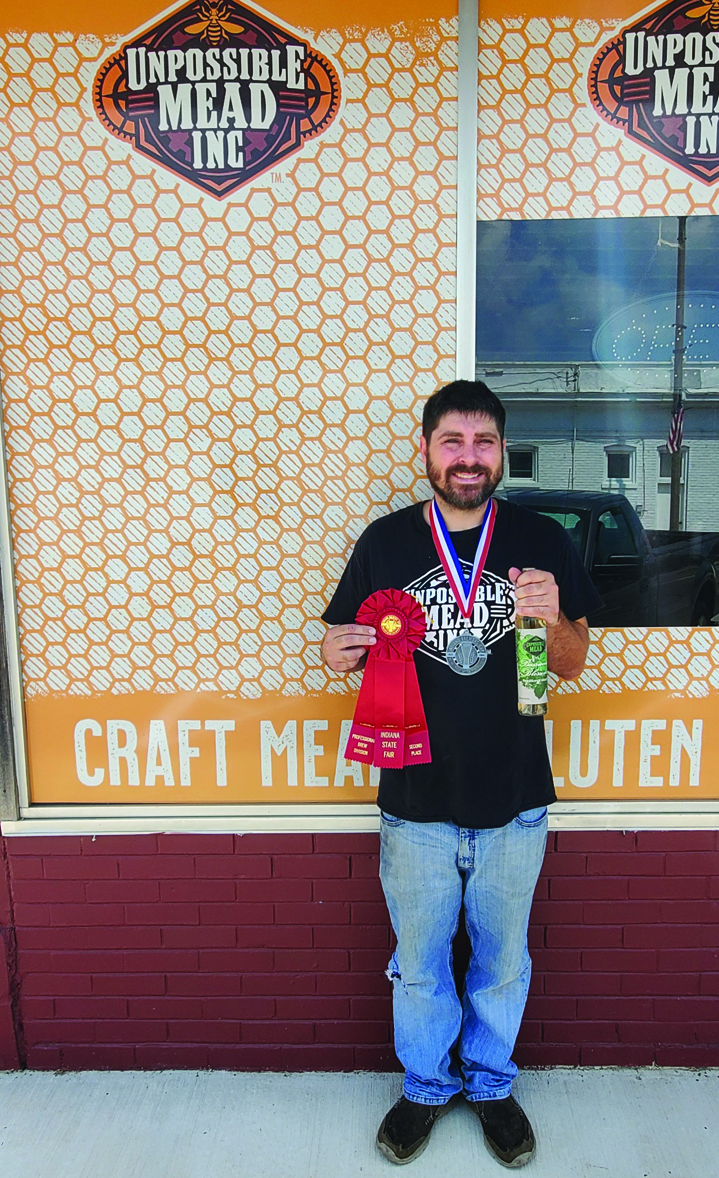 Walking through the downtown, business streets of Dwight, you’ll see restaurants, bars, hair salons, shops and then a sign …Unpossible Mead. Mead is a type of alcohol Brian Galbreath (38 from Coal City) has been creating, doctoring, polishing, specializing as a home brewer since 2013. He then branded his Unpossible Mead commercial brand three years ago and has opened a meadery at 111 E. Chippewa St. Unpossible Mead is where Mead Day will be celebrated Saturday, Aug. 7. “A friend’s husband was making craft beer in the early 2010s,” said Galbreath. “He was making good stuff and I wanted to learn how to make beer. Well, helping your buddy make beer usually means sitting in the driveway and getting drunk because there are four or five of us. “I got to the point where I was like, ‘I’m here for a reason’ and I wanted to know why was he doing this, why was he doing that. I asked a lot of questions. At the end of a brewery day, I knew it wasn’t for me because it was more work than I was willing to put in. “The next week, I started making home cider. I made six or seven of them and one of them was OK. I wasn’t really happy with it. I looked online to see what other alcohols a home brewer could make and one of them was mead. I read a little bit, got the history and it’s honey, water and yeast. My initial thought was, ‘how hard is it to screw that up.’ My first batch was awesome, the next one was pretty good and the next 12 were all hot garbage. I learned more from those 12 than from the first two I made.” During his research, Galbreath learned creating mead was a lot like cooking in which he needed to worry about temperatures, yeast strains, different types of honey and the exact moment of the process to add certain ingredients. Believe it or not, he was self taught with the internet and podcasts being his main reference points. “A lot of home brewers tend to go to the fruity stuff first. If you can make a really good traditional mead, which is just honey, water and yeast, you can pretty much do everything,” said Galbreath. “As a home brewer I focused on traditionals first. I did those for awhile and then I started into fruited meads in 2016. “The experimental mead that became Cherry Bomber won its category in 2016. It was a dry cherry mead and it was (continued on page 3) oaked. Based on where the market is, they like sweeter meads and that’s what I did with it and it became the Cherry Bomber.” Galbreath recently won a fancy red ribbon and a medal from the Indiana State Fair for taking second place in the sweet mead category with his traditional

mead he calls Basswood Blossom. Through his years of making mead, Galbreath has seen mead’s popularity rise. “Mead has become more popular. There are still less than a dozen of meaderies in Illinois. In the Chicago-land area, if you count northwest Indiana, there is a good presence of mead,” said Galbreath. There is some good mead coming in from outside of the state, but everyone is always going to champion the home grown guy. We do our best to make sure we exist, especially out here in the corn. “I’m allowed an additional two licenses outside of the one at this location. I’ve been slowly hunting for a second spot and eventually a third location would be nice to have satellite tasting rooms at more populated areas and more craft breweries I can get at.” Now with some background of mead, Galbreath and his dedication of producing the best mead possible, let’s celebrate it. Mead Day will be appreciated to it’s fullest at Unpossible Mead with everything you’d expect in a celebration. “Mead Day is a day of awareness. It’s always the first Saturday in August,” said Galbreath. “We call it National Mead Day, but it’s actually International Mead Day. Someone just picked a day on the calendar and said, ‘Mead Day’. We’re having a band, a food truck and we’re relaunching our Mead Club. “We’ll have four meads that we don’t offer now on draft for Mead Day. When Harvest Days come around, the goal is to have all of our taps full. We’re trying to expand the offerings we have and

get back to where we were before Covid.” Unpossible Mead currently offers eight different flavors of mead, but hopes to have 12 by Mead Day with two collaborative beers to offer patrons a full mead menu. The Mead Club will be available for registry at the meadery on Mead Day. The club will send a package every quarter consisting of three meads (traditional, semi-sweet, fruited) and a non-alcoholic gift such as a glass, a trivet or a jar of local honey. The mead will be exclusive to the club and will not be available at the meadery or liquor stores. Any additional information about Unpossible Mead, Mead Day or the Mead Club can be found at unpossiblemead.com or through the Unpossible Mead Facebook and Instagram pages.