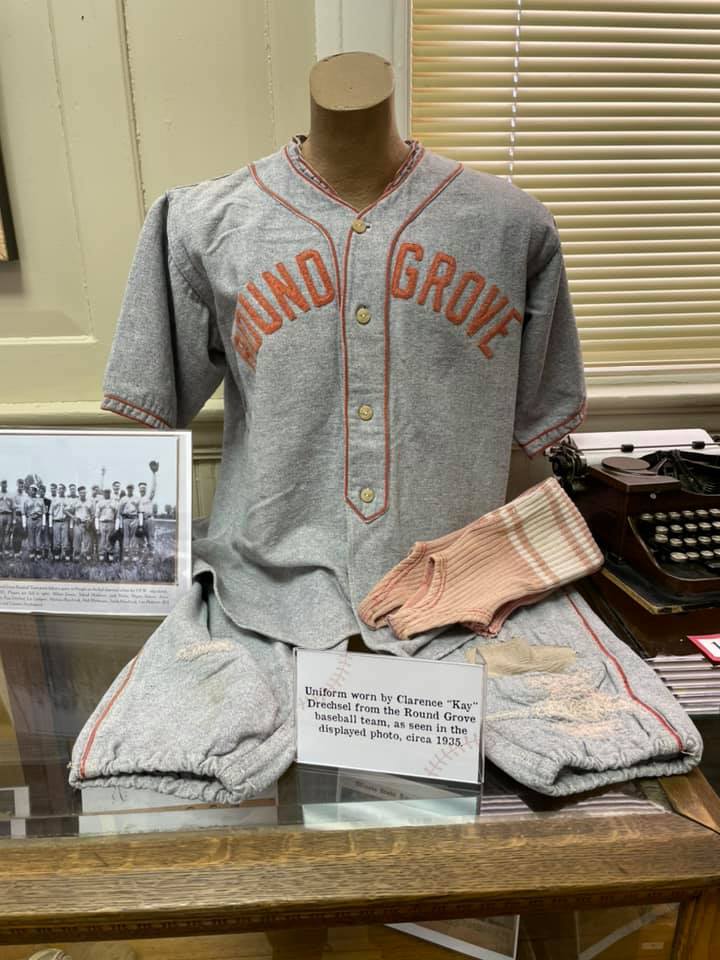 Dwight Historical Society Shares 27 Locals  Who Played in the MLB

Baseball has been played on American soil since the 1860s and Major League Baseball was formed in 1903. These are years, landmarks easily found all over the internet. What’s not easily found and put into one hub for researchers, historians and baseball fans to learn and enjoy, is all the MLB players from one town, county or surrounding counties. The Dwight Historical Society took the time to put up a baseball display sharing the accomplishments of 27 players from Dwight and its neighbors. “I’ve always been interested in sports and Bill Flott has always been interested in doing something with sports at the society’s depot,” said Kim Drechsel, a Dwight High School Class of 1969 graduate and a member of the Historical Society for the last five years. “I was helping Bill Pearch (Dwight native, who resides in Chicago and is the editor of SABR Magazine) with a project on Frank L. Smith and I was looking through microfilm. Now we’re working on a project on Thomas Higgins, who lived six or seven miles west of Dwight,

and played with the (St. Louis) Cardinals in 1908. “That was kind of a starting point for my project of looking at Illinois born baseball players that kind of surrounded Dwight. I first went to the computer and looked up Illinois born baseball players and started going through the counties. You can’t pick everybody out, so I stuck with the counties touching Dwight and Livingston County. Thomas Higgins was our focal point.” Besides Livingston County, he found players from Grundy County, Will County, Kankakee County, Iroquois County and La Salle County. The list of 27 players displayed doesn’t contain a legend or a superstar and some of them only played 15 games or one season. But to small, rural Illinois, Tom Prince, Terry Wells, George Cutshaw, Burt Keeley, Tanner Roark, Brian Dubois, Al Braithwood, John Sears, Lou Kolls, Bill Luhrsen, Scot Garrelts, Elmer Koestner, Bud Clancy, Harry Bay, Andy Bednar, Ruby Novotney, Ken Sears, Adam Shabala, Clay Zavada, Silas Johnson, Tom Sheehan, Dave Callahan, Billy

Petrick, Greg Washburn, Scott Spiezio, Ed Spiezio and Eddie Higgins mean a whole lot. “It was amazing to me to see guys like Burt Keeley from Wilmington play for Round Grove in 1899. He played for Washington in the majors and came to Dwight in 1908 to play against Dwight. George Cutshaw from Wilmington pitched against Dwight for Pontiac and then with Dwight, Frank L. Smith’s team, against the Detroit Tigers in 1907. Thomas Higgins was a senior in high school and pitched against the Tigers. “Silas Johnson was the last guy to strike out Babe Ruth three times in a game before he retired.” In part of the Red Carpet Corridor, the Historical Society opened the baseball display on May 1. However, due to obtaining the other half of the depot after the Dwight Economic Alliance relocated, the society has been renovating to make the two halves of a building come together for one museum of interesting history. For the baseball display to reach it’s full potential, there will be a grand opening in June or early summer. “I love it, I love it,” said Mary Flott, a resident of Dwight since 1970, who took over as the

Historical Society president in 2007 after Tony Thorsen held the reigns from 1980-2006. “I was a school teacher and my husband (Bill) and I were looking for things to do when I retired. We got involved kind of late, really, and we’ve met some great people and have done some fun projects. It’s just been a great thing for us. “We knew that Dwight has quite a baseball history and we knew about the Frank L. Smith team in the early 1900s. We knew that he brought clubs like the Cubs and the Tigers to play the Dwight team. Kim said, ‘I really want to do a baseball display on other baseball players’. He found great information and made a great display about the players. It has been fun.” Drechsel did the majority of the research for the display and was trying to find the best way to present names, stats and accomplishments. The pictures were neat and telling of eras, but (continued on page 12) they didn’t tell the story in the way Drechsel wanted. There were display racks, but space was a premium. He wanted write-ups to be large, but not Wikipedia pages. Needing an editor and some help arranging, Drechsel brought in his daughter Kelli Drechsel to help justify baseball in Dwight. “She was really good with fixing my notes and putting them into real English” Kim Drechsel said. “Kelli made it sound good and then found things to help with the displays like gloves, bats, birth dates and death dates. She was my computer.” Kelli Drechsel, 38, had helped the society here and there with ice cream socials and behind the scenes, but hadn’t been a major contributor to an exhibit. Bringing baseball and history together, as well as working with her father, made it easy for Kelli to dive in. “Dad had found everybody. I took what he had written. I used Power Point to display it. I double checked everything and if I found another cool fact, I would ask if we could add it if there was room,” Kelli Drechsel said. “I was the research assistant and the editor. “We’ve been raised on baseball. My brothers and I all played as kids. We’ve went to White Sox games since I can remember. I worked in baseball for awhile. If there is a game on TV, it’s on at the house. It’s a passion of mine.” This display like many others at the Dwight Historical Society, bring back memories, make you drop your jaw after finding out something happened in Dwight you didn’t know about and help pass on the legacy, linage, history of the community. Kelli has found this out through her father and working with the society. “Dwight is lucky to have all the dedicated members of the Historical Society to tell the story of our town. Everybody does such a nice job,” Kelli Drechsel said. “It’s nice of them to put in the time and it’s nice to be able to learn from everything that they do. “There are so many things about Dwight that people don’t know, don’t realize and would be surprised by. Sure, this is a little town, but there is a deep and rich history. The fact that Ty Cobb played in Dwight in 1907, that’s awesome. People may not realize that because it’s not really a nugget you come across during your regular daily routine.”

Brandon LaChance can be reached at 815-876-7941, blachance20@gmail.com or on Twitter @LaChanceWriter.