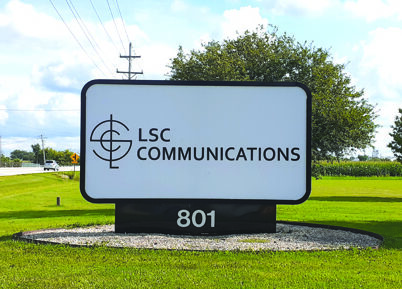 LSC Communications in Dwight, formerly R.R. Donnelley, is shutting its plant at the end of the year. Village Administrator Kevin McNamara said Mayor Jared Anderson was told about the closure on Thursday, and employees were notified on Friday. John Ray, of the Illinois Department of Commerce and Economic Opportunity, confirmed LSC submitted a WARN report. The Illinois Worker Adjustment and Retraining Notification Act (WARN) requires applicable employers to provide advanced notification of a plant closure or mass layoff. LSC Dwight employs 390 and is one of Dwight’s top employers. “We are certainly sad that this day had to come,” McNamara said. “LSC and Donnelley changed this community in 1969 when they came to Dwight — for the better.” With it, Donnelley brought a housing boom and stores and restaurants opened in its wake. They have contributed perennially to the village, including the Community Chest, McNamara said. The impact of LSC closing will be felt by gas stations, stores and restaurants patronized by employees. The village will lose out on water and sewer

funds and property taxes once it closes. The village’s portion of their tax bill is $17,500, McNamara said. LSC Communications, headquartered in Chicago, filed for Ch. 11 bankruptcy in spring after an “unprecedented” drop in print demand. It came less than a year after calling off a $1.4 billion planned merger with rival printing firm Quad/Graphics. LSC employs more than 15,000 employees in the U.S. In January, LSC announced it was closing manufacturing facilities in Strasburg, Va.; Glasgow, Ky.; and Mattoon, Ill. In 2018, R.R. Donnelley celebrated 50 years in Dwight. When R.R. Donnelley decided to erect a new plant in Dwight, it changed the village forever, instilling pride and putting thousands to work. One of the main jobs was to publish the telephone book. From gathering the information, setting the type, printing the pages, assembling and binding the books, trimming them and delivering them to countless homes, it was an enormous and complex task. And in 1968, that task was given to the citizens of Dwight when the R.R. Donnelley plant was constructed along Illinois Route 47. It was, and remains, Dwight’s largest employer. 2018 marked 50 years of printing in Dwight, 48 as R.R. Donnelley and two as LSC Communications. There were other Donnelley plants that came before Dwight, but the Dwight Manufacturing Division was to be something unique: the site of “the world’s most modern telephone directory printing plant,” with both letterpress and, later, offset printing equipment, according to a 1969 booklet the Donnelley plant printed for their customers. For consumers, that means encyclopedias, inserts for newspapers and millions upon millions of telephone books for more than 1,100 cities and towns, including Chicago, St. Louis, Indianapolis and Milwaukee, all created, printed and bound by a workforce of dedicated employees. At its peak, Donnelley employed more than 1,000 people. As Donnelley grew, so did the village. In came new subdivisions, a lively downtown and a community that holds itself up, proud to call it home. Donnelley fostered hometown pride, encouraging workers to partake in the community. Many served on school and village boards, coached sports and were involved in church activities. Donnelley encouraged hard work and rewarded that with plenty of opportunities for advancement. It fostered a culture that made you want to get up and go to work in the morning. Teamwork and camaraderie helped sustain a massive workforce.