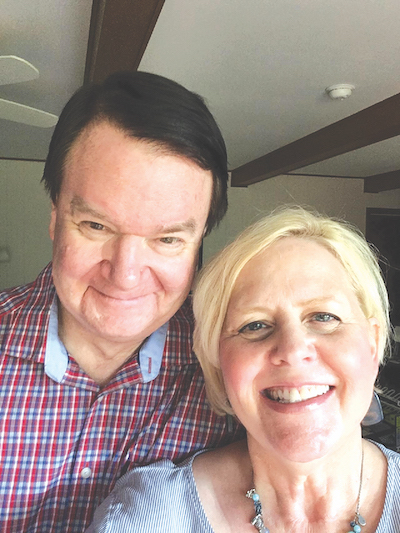 United Methodist Church in Dwight welcomed a new pastor on Sunday, July 5, and this weekend she ispreparing to meet with them — the first in-person sermon she’s given in four months since the pandemic began. “It’s a lot easier for a minister to preach in front of a live audience,” said Rev. Mary Arnold, who came to Dwight from East Peoria First United Methodist Church. Arnold, who replaces retiring Pastor Michael Ebersohl, has been ministering for nearly 30 years. The 55-year-old grew up in the Western Illinois town of Loraine, population 375. Her small-town roots would serve her well as she built her ministry over the years. She grew up in the United Methodist Church and received her bachelor’s degree in psychology, minoring in gerontology. She got her calling after college. She was working in the nursing home field and had many friends who had gone to seminary. She attended the University of Dubuque Theological Seminary in Iowa and during that time was a student pastor at Kent and Willow United Methodist Churches, not far from the Iowa border in Illinois. She stayed with these churches until she graduated seminary in 1993. Those churches would build the foundation of her career. She said the congregations identified

themselves as churches that raise pastors. “I feel my calling throughout my ministry is that God chooses what God chooses to do,” she said. By 1997 she was working at Monticello UMC near Champaign. Two years later she married Paul Arnold, also a minister, and they relocated to Southern Illinois, where she ministered in Coulterville. One of the highlights of her career was co-pastoring with her husband from 2003-2008 at Rushville First United Methodist Church. The couple never had children, and grew to love the congregation’s young worshippers there and the other churches she served. “You can love them and spoil them and you can send them home,” she laughed. In 2008, the couple moved to East Peoria. She was appointed to the UMC there and her husband became directing pastor at Peoria University UMC. They were there for 12 years before coming to Dwight. Her mission here will be the same it has always been: “Our mission is to share Christ with others … and grow deeper in faith,” she said. Arnold’s first sermon in Dwight was over the Internet. Bishop Frank Beard has allowed the UMC to begin in-house worship beginning this weekend, with Illinois now in Phase 4. The Dwight church averages between 170 and 200 worshippers on Sundays between two service times. They will now limit 8 a.m. and 10:30 a.m. services to 75 people. Families living in the same house can sit together, and social distancing will be the norm for now, with groups and individuals six feet apart. There will be no social gathering inside, and everyone’s name and contact information will be gathered if tracing a case back to the church is necessary. Masks are required, and services will be cut by 15 minutes to 45 minutes so sanitizing can be done between the two Sunday morning times. “Almost four months,” Arnold said about her last sermon in front of a live audience. “It’s heartbreaking.” The service will also be live on the Internet for those who wish to worship from home. Something she would like to hit home is: “Our God is much bigger than we think our God is,” she said. “Too often we try to put God in a box and he doesn’t fit.” With so many people struggling economically and mentally during the pandemic, it’s even more important to worship and trust in God, she said. But there’s that catch-22 — there is a risk in the very act of gathering, and personal connections are more important than ever during a time of social distancing. But she stressed that God is not in the physical church; he is in the heart. “God is big enough and he can help through these hardships,” she said. “He’s present with us.”