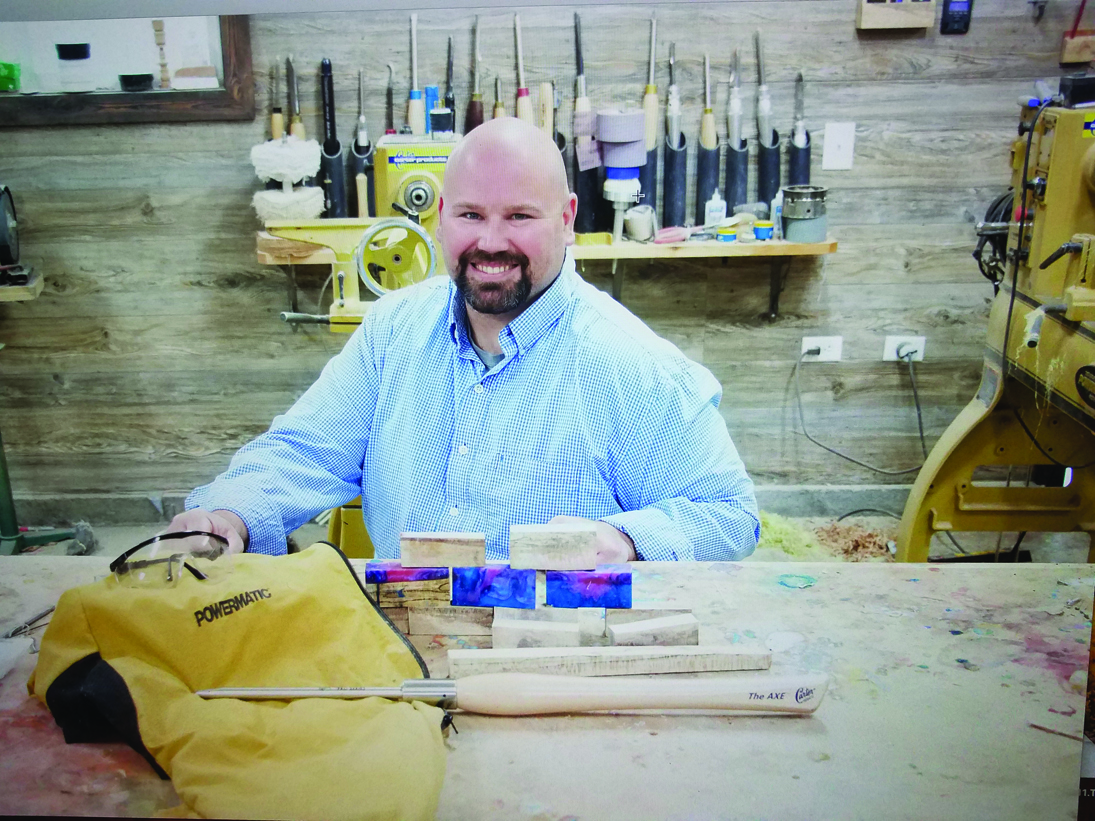 Back in 1971, Apollo 14 carried 500 seeds to the moon and back. Back on Earth, they were planted in various locations around the U.S. such as the White House and the Kennedy Space Center. These so-called Moon Trees are a symbol of exploration and discovery and helped celebrate the nation’s bicentennial. But when Hurricane Irma plowed through Florida in 2017, the sycamore that had stood on the grounds of the Kennedy Space Center since 1976 was brought to the ground. All that was salvaged was one log. The limb was cut into five slabs, each about 1¼ inches thick and 20 inches long, and distributed to some of America’s most prestigious woodworkers. Among them Scott G. Phillips, an avid guitar player, who commissioned the C.F. Martin Guitar Company to create a moon tree guitar. Intarsia artist and author, Judy Gale Roberts, spent 1,000 shop hours to design a space program-inspired wood vignette titled “For All Mankind.” Alex Snodgrass, a bandsaw expert and professional woodworker from Virginia who works with Carter Company, also got a slab, since he was the one who cut the log. But over time Snodgrass’ treasured wood began to split and crack. That’s where nationally-renowned woodworker Keith Lackner of Dwight stepped in.

He’s preserved it for eternity using an epoxy resin technique he pioneered. Lackner has been featured in magazines and radio and studied under elite woodworker David Marks. He’s also a familiar sight at arts festivals around the U.S. He even has his own resin casting tool brand, the Keith Lackner Pro Series by Carter Products, and is publishing a book about resin casting. Lackner, 44, grew up inBurbank but graduated from Dwight Township High School in 1994 and has lived here ever since. A production supervisor for Vactor in Streator, he has been into woodworking for nearly 30 years and has a professional shop at his home. Powermatic, the world leader in woodworking equipment, recently filmed commercials in his shop. He creates decorative wood vases and bowls using resin and burls — those knobs that grow on the sides of trees. He was one of the very first artists to cast resin in wood about seven years ago after visiting Santa Rosa, Calif. He shipped home a pallet of walnut burls that were beautifully grained but were split and disfigured. But Lackner had an idea on how to fill the voids: resin. He mixed resin with mica powder or pigment, put his wood pieces in a mold to keep them in place, then poured the resin over the wood. The wood would go into a pressure pot and when it came out the next day, the liquid plastic would be hard, full of glorious color. From there, he could turn and sculpt the wood into illustrious art pieces.

An outdoors guy who has seen much of the country while traveling to the most prestigious art shows, he is inspired by what he sees in the world. “My colors, I get from nature,” he said. The industry had seen nothing like it, and fame came to him through some of the most elite woodworking companies in the world. His name became known in the wood circle, and Snodgrass knew Lackner through the Carter Company. When his pieces of moon wood began to split, he immediately turned to Lackner to save them. Stabilizing the moon wood is part of a NASA project. But these pieces of wood — 10 in all, each about 3 inches tall by 4 inches long and 1 ½ inches wide — were more precious than anythingLackner had handled before. He first heated them up to pull all the moisture out of it, then submerged them into his vacuum chamber to pull out any trapped air inside it, allowing the resin to better seep into their gaps. He chose a mix of blues, pinks and purple micas for the resin. When the pieces were prepped, he secured them with a mold, poured over the resin, and put them into the pressure pot. What came out were handheld blocks of sycamore infused with the shimmering, ethereal colors of the Milky Way — exactly how Lackner envisioned. Snodgrass is famous for the small bandsaw reindeer he carves and sells — some 5,000 every year. Lackner said the resin moon wood he sent back to Snodgrass this week will be shaped into his world-renown reindeer. And for Lackner’s work? Well, Snodgrass gifted him a 20-inch-long piece of moon wood. He plans to cast them in resin and turn them into three very unique pens that will be given to some very deserving people in his lives.