Solved: The Case of the Missing Leotard 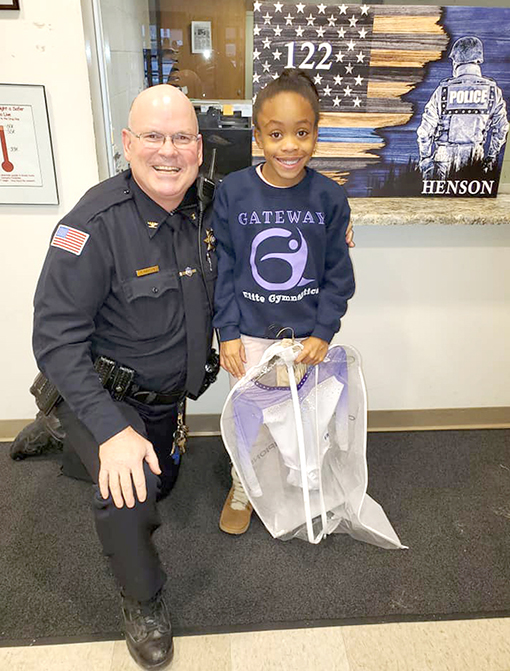 Sleepy little towns like Dwight don’t always see much action. But last weekend the Dwight Police Chief found himself in the middle of a well-publicized cold case: The case of the missing leotard.
Mario and Shonetta Randall, of downstate Swansea, were on the way to the Bravo Classics Gymnastic meet on Saturday, January 18 in Lombard with their daughter, 9-year-old Milan, who was set to compete with her team Gateway Elite Gymnastics. They packed the SUV with everything they would need for the meet, including Milan’s warm-ups and leotard.
It’s a five-hour drive from the St. Louis suburb to Lombard, and Mario stopped for gas at the Circle K on Northbrook Drive in Dwight. It was a particularly cold and windy day, and Mario and Shonetta, who also had their son Mario Jr., 11, and daughter Mai Lin, 7, in tow, were doing their best to keep the kids protected from the elements. Milan, 9, op ened the passenger door as they prepared to get out but Mom and Dad decided to drive across the highway to the Love’s Travel Stop, where they had bigger bathrooms.
All was well until they arrived at The Westin in Lombard. That’s when they realized Milan’s leotard and liner, which was tucked on a hanger inside a garment bag, was missing.
Milan began to cry. Would she be able to compete? What would she tell her coaches and teammates?

It may just seem like a leotard, but to a fourth-grader who’s been in gymnastics since age 2, it meant much more. It was her first meet of the season at Level 6, and Milan couldn’t wait to slip on the silky lavender and white garment dotted with sparkly rhinestones on the sleeves and neckline.
For Shonetta, it meant having to buy another one for $267. Gymnasts get a lot of wear out of their leotards — two seasons, in fact.
The Randalls double checked everywhere between home and the hotel. They even made multiple calls to Circle K, the McDonald’s next door, and Love’s, but the leo was nowhere to be found.
Milan was able to compete in the meet that day thanks to a teammate letting her borrow a uniform. She even placed first in beams, first in floor and first all-around. But triumph would have felt much better in her own uniform.
Shonetta took to Facebook on Thursday, January 23 and created a page, “Find Milan’s Leo.” She even offered a $100 reward.
“We need Dwight, IL’s help in locating this garment bag,” she wrote. Milan’s next competition was in two weeks.
The post captured the town’s hearts, and over the course of several days, it had been shared 80 times.
The police department received the plea for help, too. That’s when Chief Henson stepped in on Thursday afternoon.
“When I learned of the information, I immediately drove out to Circle K and checked the premises, including the ditch line.  I had no luck there, so I drove to Love’s across the street.  I checked there with no luck. So my day ended with a little girl still being disappointed that she lost her gymnastics Leo.”
Henson was not ready to give up when he arrived at work on Friday.
“I drove out to Love’s and spoke with the workers there.  They all said they saw the plea for help and also checked the area themselves.  I did a second check of Love’s including the farmer’s field to the south and west, but still no luck.  I did see a large plastic bag as I drove out of Love’s and I thought I was in luck, but it was just a plastic bag.”
“I then went and thoroughly searched the parking lot at the Circle K, but no luck,” Henson said. “Not knowing which way the wind was blowing on Saturday morning, I drove over to McDonald’s, and as I looked to my left, I saw this plastic bag tucked under a bush, and I thought just maybe I will be lucky this time.  To my surprise, sure enough still in the plastic garment bag, is this young girl’s gymnastics Leo. It was soaked due to the inclement weather, so I took it to the police department, hung it up and dried it with a box fan.”
Needless to say, the family was ecstatic. Especially Milan. “She was in tears again. She was so happy and relieved,” Shonetta said.
Henson offered to meet them halfway to return the leotard, but as fate would have it, the Randalls were coming this way anyhow for Mai Lin’s gymnastic competition in Bourbonnais. They met Friday at the Dwight police department to claim the leotard and offer their heartfelt thanks.
“Thank you to Dwight, IL and the surrounding area for sharing, looking, wishing, hoping and praying. … This made my daughters day!” Shonetta wrote in another post, which was shared more than 1,600 times.
“I know there were several other people who also answered the plea, and were out searching.  I am just thankful we live in a community with good people, who will go out of their way for a complete stranger,” Henson said.