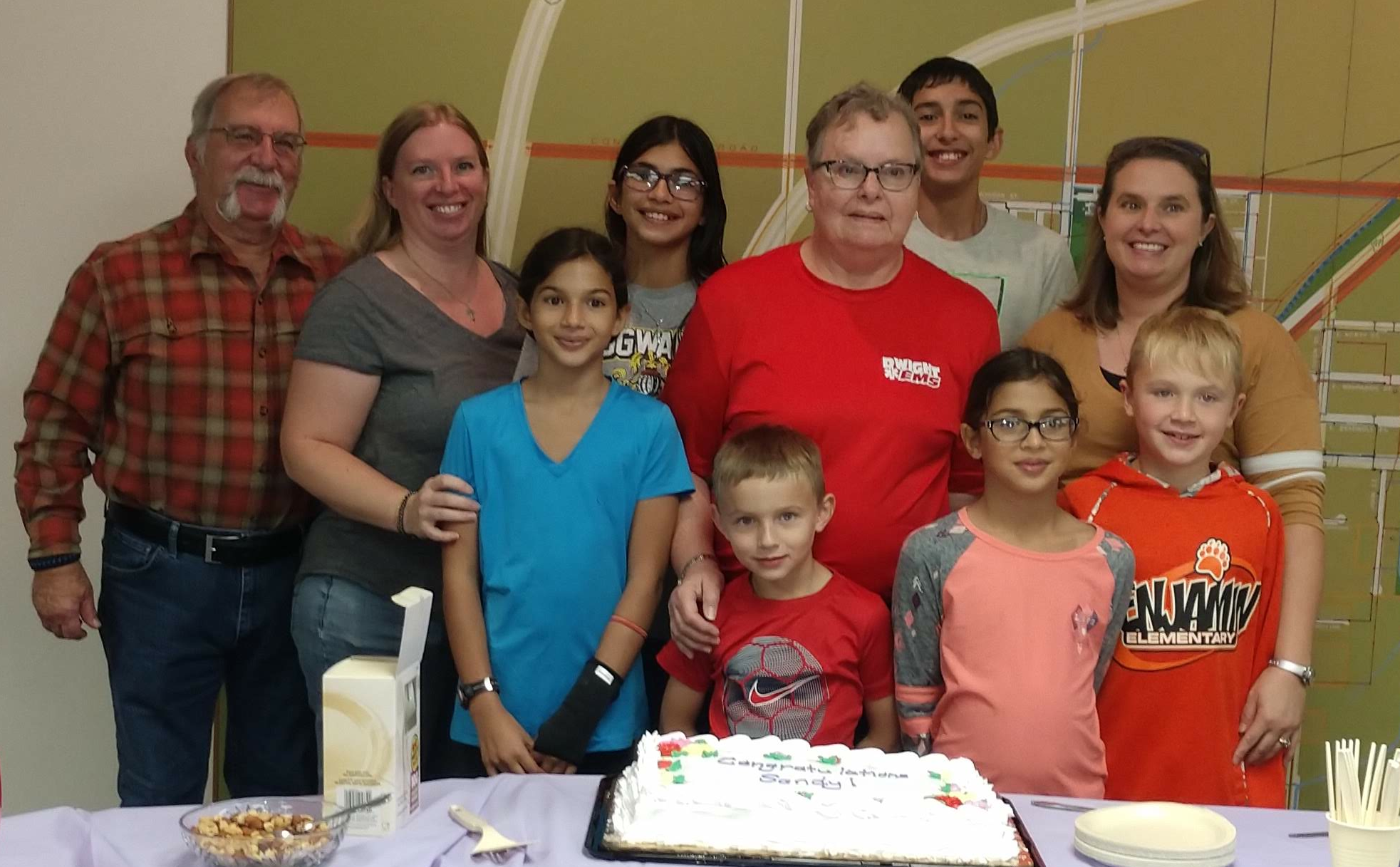 After nearly four decades of service to Dwight and the surrounding areas, EMS Paramedic Sandy Kokaly retired on October 4.
If you have ever been in an emergency medical or trauma situation, you know the relief when the ambulance arrives and paramedics and EMTs take over. For 37 years, Dwight’s Sandy Kokaly has been answering those calls. She has made a profound mark on the community and the people she served, and has left lasting impressions on many lives. Recently, someone I personally know had the need for ambulance services. That person told me, “Sandy Kokaly was on duty…she knew what I needed.”
Sandy joined the Dwight Ambulance Service in 1982.  At that time, it was a volunteer service operating as a Basic transport service under the direction of the police chief.  The fire department was separate then, as it still is today.  The ambulance service was housed with the police department, and police officers were required to be on the service. Also at that time, the Village of Dwight owned the ambulances and the medical control was through the Will-Grundy EMS System, Silver Cross Hospital, Joliet.  After joining, Sandy became an Emergency Medical Technician-Basic. In 1984, she graduated as an EMT-Intermediate through Will-Grundy.  In 1990, the Dwight Ambulance Service changed to the St. Mary’s EMS System in Kankakee.  In 1993, Dwight Ambulance Service became its own entity, changing to Dwight Emergency Medical Service.  The Village of Dwight contracted with St. Mary’s to provide full-time staffing for the ambulances.  Sandy was among the first full-time staff members along with Al Metzke, her partner Rod Murphy, Jackie Sparrow and Dave Pellitier.  Sandy was in Paramedic school at the time and graduated as an EMT-P in 1994 through St. Mary’s program.  Through the years, Dwight Emergency Medical Services has had contract changes which include St. Mary’s, Kurtz and GMR.  Its current medical control is through Morris Hospital.
Providers were not the only changes as, according to Sandy, emergency medicine has seen many modifications over the years including changes in Standing Medical Orders, advances in equipment, techniques, and changes in medications ambulance crews carry.
“Our certification is through IDPH and we are required to have a set number of hours of continuing education every four years to recertify,” said Kokaly. “There are also medical system requirements.”
As one might imagine, the stories a paramedic could tell would fill volumes.
“There are too many stories of calls remembered to put here,” said Kokaly when asked. “But, when people in police, fire or EMS get together, there is always a conversation that begins, “Do you remember when……?”.
During her career, Sandy has delivered 13 babies. In February of 1995, she and her then EMS partner Rod Murphy delivered two babies in one day.
“I have spent my whole career serving Dwight and the surrounding area,” Sandy told The Paper. “I feel a strong sense of community connection.  It is wonderful to help people you know and it is also a terrifying responsibility.”
Sandy recalled a story where once a sense of  fear and alarm  hit very close to home.
“It was horrible one day when we responded with the ambulance to a car struck by a train,” said Sandy. “When we arrived on the scene, I saw my dad in the smashed car. As soon as I got close enough to hear him, Dad was yelling ‘It’s not me’.  He was a first responder on another fire service and had crawled into the car to help the victims.”
Service was just part of life in the Kokaly household as husband Joe was as a part-time police officer and served as an EMT on the ambulance team.
“My husband Joe and I were on the ambulance service together for years,” said Sandy. “Our daughters grew up knowing that when the pager went off, one of us would be leaving.  When they were older, sometimes both of us would leave.  It didn’t matter if it was in the middle of a meal, a softball game, a birthday party or Christmas. Someone needed help and we would go.”
Aside from the disruptions of family life, there are other challenges when answering a call.
“A challenging aspect of emergency medicine is quick thinking, sorting out possible scenarios of care and finding the best outcome for the patient,” says Kokaly. “It is not always the same answers. Patients are individuals.”
What is her advice for someone considering entering the field?
“For someone considering being a paramedic and going into emergency medicine, don’t do it for the money,” advised Kokaly. “Enter into it with a strong desire and dedication to help people in their time of crisis or need.”
For the Kokalys, retirement may offer some interrupted time to focus on family.
“Joe and I have two fabulous daughters, two terrific sons-in-law and 6 wonderful grandchildren,” said Sandy.
Daughter Sandy Abraham and husband Jeneson live in Villa Park where Sandy is a nurse practitioner and homeschools their 4 children Josiah, Lydia, Sofia and Rebekah. Jeneson is a physician’s assistant.
Daughter Katy McCormick and husband Kurt reside in Bloomington. Katy has her Masters in Early Childhood Administration and runs an in-home daycare while Kurt works for the Department of Corrections and is very active in Special Olympics. Their sons are Andersen and Lincoln.
As Sandy puts the pager on silent, she recalls the many people that she worked with and those that supported her along the way.
“I’ve had some great partners over my time in EMS.  Rod Murphy, Tony DeNado, Steve “Squid” McCabe, Andi McGraw…Dwight EMS has been a great place to work with many knowledgeable, caring, dedicated people,” said Sandy.
Thank you, Sandy Kokaly, for your many years of dedicated service to this community. And to EMS personnel everywhere, we are grateful. Carry on the good work.