Mission Trip to India a ‘Blessing 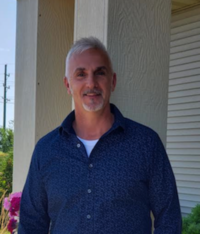 Pastor “Randy” Randle of New Life Assembly of God in Dwight has a can on his kitchen countertop. Instead of birthday and Christmas gifts and compensation for performing ceremonies, he asks family and friends to put money in the can. It’s a sort of vacation fund, but not in the traditional sense.
It’s Pastor Randy’s “mission can,” money he raises to travel abroad and help the less fortunate. And come September 25, money that’s been tossed in the can will allow him to board a plane to Mumbai, India, a city of 18 million people that is known for its poverty, particularly in the slums.
“It’s just one of those things. I’m here on this Earth and anything I can do … I want to help people and bless them,” he said.
He will be there until October 11, staying with Caleb and Masha Ellis. Masha is the daughter of Brad and Barb Wilkinson, of Dwight, and she married Caleb, a native of India.
The couple works with Lifesong in Gridley, which builds orphanages, among other ministries. Pastor Randy met the Ellises when they were recently back in Dwight. He even introduced them to Rod Kodavatikanti, a friend of Pastor Randy’s who is a native of India and now lives and works in Chenoa.
Pastor Randy has wanted to go to India since he was 19 and in Bible school. His first trip was two years ago, when he worked in Ongole, on the Eastern coast, building a water well and helping build an orphanage.
His upcoming trip to India will be a little different but just as rewarding. He is traveling solo and staying with the Ellises, who will work with him. Pastor Randy said he will be visiting several non-profits, visiting children’s homes the Ellises work with, and participating in prayer walks, including in the redlight areas.
He will also be speaking at two churches, conducting a leadership training for youth, and will speak to youth and young couples about God’s perspective on dating and marriage.
Pastor Randy will also try to connect with the Rotary in Mumbai and hopes to meet with the city’s mayor in a diplomatic mission. He has met with officials in past mission trips, leaving with them gifts from Dwight and Illinois as a token of goodwill and peace.
Pastor Randy prepares himself for mission trips and the poverty he is likely to see by spending a few weeks in fasting and prayer. It’s worth the sacrifice; he said he has been blessed that God has allowed him to travel. He’s been on mission trips to Mexico, Netherlands, Ireland, Slovakia and Poland. He has also visited the gypsy neighborhoods in Czech Republic, and is planning to return there next year.
Although he personally funds his own missions, some people do give money and every penny goes toward the trip. People may support this one by writing a check to New Life Church and putting “India trip” in the memo.
Pastor Randy is also constantly on the lookout for items that may be beneficial to the residents he’ll meet. He recently found affordable shoulder bags at Walmart that he’ll give out — “just something to say thank you for letting us be with you.”
“I truly believe that if we bless people then we’re blessed for it,” he said. “It’s just an honor to be part of humanity.”