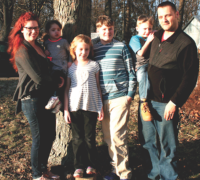 The Deb and Bryan Baker family of Mazon, who will soon be moving to rural Verona, plans to adopt two children, a boy and girl.
Also the Nicole and Jacob Paulsen family of Verona will be adopting a boy.
There are 42.4 million people in the Ukraine, a former Soviet Block nation, now independent.
But according to Nicole and Deb, the nation of Ukraine is suffering from severe economic hardships, and a great deal of alcoholism, accounting for a large number of orphaned children, more than 100,000.
“They don’t have a welfare system,” said Nicole, ironic since it is a former communist/socialist country.
“They are just now starting to look into a foster system,” added Deb.
Both families went through the Host Ukraine program to host children over the summer and during winter break.
Under the program, unlike the Foster Parent program in the United States where the family receives a stipend to support the costs of hosting a child, the host parents for Ukrainian children have to pay, roughly $3,000 for each child for the summer and winter breaks.
Journey to Adoption
“Jacob and I went into it knowing we wanted to adopt,” Nicole said, the mother of four children of her own.
“But the child would have to be a good fit.” Thus the “trial” during last summer and winter break.
Nicole’s family hosted a boy named Misha, whom they now plan to adopt. For the Bakers, they had Artem and Inga, a boy and girl.
Deb also has four kids, so her family will grow from four to six children.
“My husband and I always talked about fostering,” Deb said, adding that they were thinking of fostering a child after their kids were grown.
The Baker children are ages 11, 14, 16, and 23, while the Paulsen children are in a much younger range at two, four, nine, and 14.
The two families knew each other from churches they previously attended together, and they learned of the Host Ukraine through a mutual friend from Seneca.
For Deb’s two children, it was difficult at first, with Artem and Inga not used to home life with a family.
“It was an adjustment,” Deb explained. But she also saw growth in her own children.
“I’ve noticed they seem to notice the needs of other people more,” she said of her own brood.
In the case of Misha at the Paulsens, he was close to the same age as her oldest, Eli, who also played a lot of video games with Misha.
“Video games are a common language for kids,” Deb joked.
Misha liked soccer and showed Eli how to play while Eli showed Misha the ins and outs of baseball and basketball.
At first, Nicole’s oldest daughter, Cameryn (age nine), was a little unsure being surrounded by all the boys in the house. But she said, “I really like him and we got used to each other.”
Mother Nicole said Misha and Cameryn would play Legos together.
Misha earned money doing chores and purchased a toy robot for Nicole’s youngest boy, Greyson (age four).
So after the initial test to see if the families “fit,” the next stage is adoption, which not only takes years, but lots of money. Two children will run roughly $45,000 to $50,000 for the Baker family. The Paulsen family gets a lower cost for just the one child at $28,000 to $36,000. Those costs include passports, adoption papers, three required visits to the adoptees in the Ukraine, and other legal paperwork.
They will be U.S. citizens when they are adopted retaining dual citizenship as Ukrainians until age 18 when they can choose to keep or drop Ukraine citizenship.
There are two fund-raisers set up this month to raise money for both families.
The first one is Brunch with the Easter Bunny, Sunday, March 18, at the Fraternal Order of the Eagles in Morris.
The second one is taking orders for eggs to “egg” people’s yards for Easter. To participate in the “egg” fund-raiser, call Nicole Paulsen at (815) 474-5109 or Deb Baker at (815) 252-0334.
People may also donate directly through Paypal to dbaker731@yahoo.com for the adoption.
If people wish to make a tax deductible donation, they will need to email info@hostukraine.org and they will process their donation.
“They just need to indicate they are donating for the Baker/Paulsen families,” Deb explained for the Host Ukraine web site.