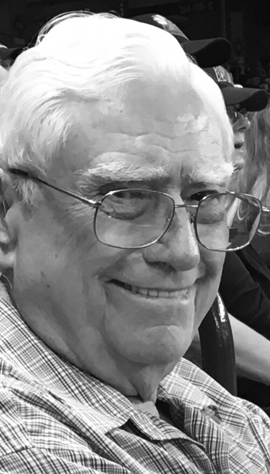 TEMPE, AZ – Kent McFarlane, a former Dwight resident, passed away Saturday, December 2, 2017 after a lingering illness.
A memorial service will be held at Tempe Mortuary, 405 E. Southern Ave., Tempe, Arizona Thursday, December 7, at 2 p.m. A reception will follow.
He is survived by his wife, Ginny, with whom he celebrated 60 years of marriage this year. He is also survived by four children: Bob (Kathy), Deb (Fred), Sheri and Dan (Judy); seven grandchildren; and 16 great-grandchildren.
Kent owned the Sinclair Station in Dwight and served in the Army Reserves from 1957-1963.
He learned the electrical trade from Dwight resident, John Clausen, and started his own electrical contracting company after moving his family to Arizona in 1975.
After retiring in 2009, he enjoyed building toy boxes for his many grandchildren and great-grandchildren.
Kent and Ginny were co-founders of Christ’s Family Fellowship, and for 21 years provided Sunday night services for Westchester Retirement Center in Tempe. It was a very rewarding experience.