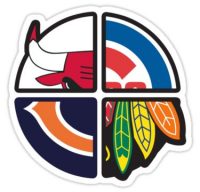 Now that the underappreciated holiday has taken place, it’s time to take on the rest of the winter. The beginning of December is usually a real hurdle, it’s always when it starts to get colder than just regular cold, where the daily temperatures start to routinely be around 20, not enjoyable in the least bit.
In the past, I’ve touched on how warmer weather climates just aren’t as good sports cities, they just aren’t, there are too many other fun things going on to live and die with a sports team. In Los Angeles, the Lakers can be awful, and it’s still really nice there, that never gets taken from them.
Flip that to Chicago, and Illinois it all gets taken from us, every year, the summer fades, and we’re forced to look winter right in the face. Which is why we end up gravitating so much to the winter sports teams, the three being, the Blackhawks, the Bears, and the Bulls, the three Bs.
The problem this year, going into today, with all three of those teams, all in last place. Every one of them, the Bulls are in last, the Blackhawks are in last, and the Bears are in last. This isn’t the Ricky Bobby “If you’re not first, you’re last” either, it’s actual last place.
Do these general managers, do these players, do they not know that the city needs them? The state needs them, what else do we have to hold on to? I’m not really sure what the answer to that question is, in years past the Blackhawks have been a powerhouse, but are off to a very slow start this year; there’s reason to believe they can still turn it around though.
As for the Bears, and Bulls, they just both stink, no way around it, I think they should have collaborated a little bit more and really lined up who was going to rebuild and when, to have both happening at the same time, just really makes it tough to be a Chicago fan.
I ask as a fan, I ask as a person who really doesn’t like the cold winter months, please play better Chicago. The city needs you, they need you to make it okay that it gets dark at 4 in the afternoon. It’s looking like the Blackhawks are our only hope, hopefully they will come through. We need it.
Aaron J. Boma
2016 ISU Graduate