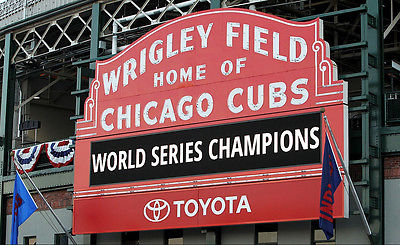 The past two Sundays I’ve attended both of Chicago’s baseball stadiums, and it got me thinking on how the two of them compare. It’s a unique feature that Chicago possesses, in having two professional baseball teams – it’s something that only New York City and Los Angeles can claim, with the Mets and Yankees, and the Angels and the Dodgers. There are others that could maybe fall into this, if you counted the Athletics and Giants, as their cities are very close. The biggest difference, right off the bat (baseball pun, have to love it) is the location. Wrigley Field is located in the middle of a neighborhood – there are houses steps from the outfield walls; you can watch the game from the rooftops of apartments. It gives an atmosphere unlike almost any other ballpark because of its location. The White Sox is much more standard of a current day ballpark. There’s actually space for the park; there’s parking, it looks like it was made for the area in which it stands, whereas Wrigley was there and then built around. In that way, it’s much easier to get in and out of Guaranteed Rate Field; it’s much more spacious; what it doesn’t have in ambiance it makes up for in convenience. The next big thing to compare, naturally, are the ticket prices. This one really isn’t even close. A White Sox game is much more affordable than any Cubs game will probably ever be. The Cubs winning the World Series has obviously inflated the prices somewhat, but all in all it’s usually much more expensive to attend a Wrigley Field game. The interesting part about that is, the concession prices are almost identical. You would think the concession prices would mirror that of the tickets, but that’s not the case. They’re almost exactly the same across the board. I’m a Cubs fan, so I obviously lean toward Wrigley in the comparison, but I really enjoyed going to the White Sox game – for the price, it was a very fun experience. It doesn’t compare to the Ivy at Wrigley, but was really good nonetheless.