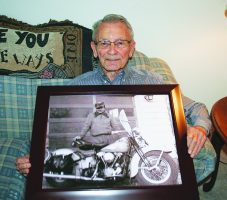 An explosion at the World War II Joliet arsenal, and getting shot in the stomach failed to stop Jewell Carlson, now 93, who will soon be celebrating his 70th wedding anniversary with his wife Marguerite (Peg).Carlson grew up in LaRose, southwest of Streator, with a father, Harold Carlson, who worked at the LaRose train depot.

His work career started with what his son, Robert, termed a “dream” job when he landed a position after graduating from high school in 1941. He secured a job in the small parts department at Harley Davidson in Michigan.

“Dad loved motorcycles and had many cars as well,” Robert remarked.

To prove his son’s statement true, Jewell pulled out a huge black and white photo of him with his 1946 61 Overhead Harley Davidson bike.

After working at the Harley Davidson factory, he came back to Illinois to work at the Elwood arsenal plant, sometimes called the Joliet Arsenal.

“I was one of the lucky ones,” Jewell explained.

The explosion on the assembly line at the Elwood facility resulted in 48 dead or missing and was felt as far as Waukegan, more than 60 miles north.

“Assembly Lines were located in separate buildings which were separated by substantial distances limiting major damage to the facility as a whole,” according to Wikipedia.

“I was in building 10,” Jewell went on. “The explosion blew me out of the building. I had 80 stitches in my head and my skull was fractured.”

Robert said his father told him he was listed as “missing” for a few days after the explosion and his mother had her “hair done to prepare for his funeral.” But plans for his funeral were thankfully premature for the unstoppable Jewell Carlson.
Not only did he survive his wounds from the explosion, but he joined the U.S. Army afterward, and was stationed in India, fighting the Japanese Army during World War II. “I was almost captured as a prisoner,” Jewell recalls, saying a group of African paratroopers swooped in at the last moment to save him and his men from being captured by the Japanese. He may not have been captured, but a ricochet from a bullet hit him in the stomach while he was in battle in India. This too he survived.
After mustering out of the Army, he came back to Illinois in 1945, first home to LaRose, then moved to Dwight to work at the historic depot for the railroad, like his father. While on the job, he would ride around Dwight in his car before going to work at 3 p.m., and often saw a young girl, Marguerite, or “Peg” as friends and family call her, standing in the window of the Fashion Shop, a women’s dress shop in downtown Dwight. “If I didn’t have any customers, I’d stand in the window,” Peg explained. “One day he came in.”
Finally, one day, Jewell went into the store to meet the young lady he kept seeing in the window. In 1947 they were married, and celebrate their 70th wedding anniversary next month.

The historic depot is no longer used as a rail depot, but Carlson remains an active resident of Dwight.

He took other jobs after working for the railroad like his dad, such as a security guard at the Dresden Nuclear Power plant near Morris, and working as a driver for Rub Chevrolet in Dwight. He survived the Rub dealership, too.

He even survived an auto accident two years ago, but his motor vehicle did not, Jewell explained.

“I got in an auto wreck and it destroyed a good car,” lamented Jewell.