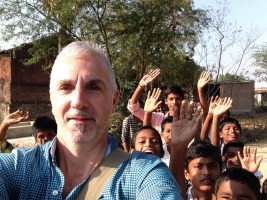 Pastor Randy’s trip was from Feb. 8 to Feb. 23, and the village of Podili was the recipient of the well. Such wells cost between $1,200 and $1,500, but the town of 800 people, with roughly 1,500 total counting people surrounding the village in rural areas, could not afford such a project, making an average of $4 a day in wages.

Kodavatikanti was with Randle in India, being originally from the city of Ongole, population about 300,000. Ongole is near Podili. Randle said Kodavatikanti has been living in Chenoa for 11 years. After seeing water come out of the well for the first time in Podili, Randle said he wrote in his journal: “This village now has living water, the living water of God.” He said like most people, there have been important events in his life, but seeing the well was the most momentus. “I got married and had kids, but being able to pump that water, that was probably the greatest thing I have ever seen as a human being,” Randle said.

In addition to watching the well being dug and constructed, Randle met with a Rotary club in India, presenting gifts such as a Dwight Cat’s Meow of the Country Mansion, where the Dwight Rotary holds its meetings. He also spoke at four churches in India, including Pentacostal and Baptist churches.
One of the things Randle noticed was the low technology in the town. There is a tobacco “factory” in town, designed to dry tobacco leaves, one of the cash crops supporting the townspeople. The factory consists of a large building, several stories high with tobacco leaves hanging inside, drying utilizing a wood-fired stove at the bottom and pipes to distribute heated air.

And, of course, the pump for the well is hand-operated, also low-tech.

Kodavatikanti took Randle to a fabric store and had a hand-tailored shirt made for Randle. The tailor was considered one of the better ones, as there are more than one operating in the Ongole area in India — again, hand-made without the use of high technology.

The town of Podili consists of mostly agricultural works, growing tobacco and cotton in the area. He said the climate was hot and dry, and the soil was kicked up like a smoke cloud when the well was drilled, concealing the truck and workers in the dust cloud.

Before Randle went on the trip, he had put an old pump from a local farm and a bucket at the church, asking for donations for the well, raising $600, he said.

Randle said he has a 10-year visa to visit India, so he plans to be back to provide more wells.

“For me deep down, it’s about the Kingdom of God showing his love with people helping people,” Randle said.