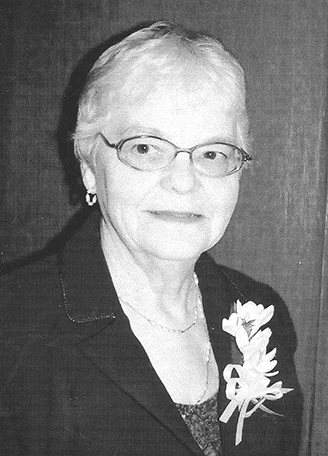 Ann was born February 22, 1936 in Morris, daughter of Erwin G. and Velma L. Finch Lee. She received her education at Mazon Town-ship High School during 1950-54 and Indiana University in 1954.

She married the love of her life, Robert A. Williams, August 13, 1955 in the Mazon Park Street Congrgational Church. Ann and Bob raised their family and farmed corn and soybeans for more than 57 years in Goodfarm Township.

Ann was a very involved and a highly valued member of Park Street Congregational Church. She served as a Sunday School teacher, a deaconess and a moderator. She was an accomplished seamstress. She was instrumental in leading a quilting club which sewed and raffled a quilt benefiting the church annually since 1993. Her sugar cookies were an anticipated treat at coffee hour after church services.

Ann was a member of the Pieces From the Heart Quilt Guild, where she actively participated in annual quilt shows by displaying her creations. She shared her love of sewing and quilting with many family members and friends, often giving a custom-made item for special occasions such as weddings, high school graduations and celebrating a baby’s birthday. Ann’s community involvement included teaching sewing for 4-H and serving as a clothing judge at the 4-H Fair. She also served as a Goodfarm Township election judge.

Ann was quick to lend a helping hand and offer a warm smile. M & M and chocolate chip cookies were a staple at her house. She enjoyed the company of her grandchildren and in recent years her great-grandchildren. Survivors include Ann and Robert’s five children: Terrie and her husband, Dan Zilm, of Hennepin; Jacqueline and her husband, Trent Sparrow, of rural Dwight; Greg and his wife, Rocky, of Coal City; Todd and his wife, Lynne, of Marietta, Georgia; and Karen and her husband, Steve Jara, of Parker, Colorado.

She was preceded in death by her parents; her husband, Robert A. Williams; her brother, Ralph Lee; and her sister, Mary Ellen Punke.

Friends called from 4 until 8 p.m., Monday, at the Funeral Home.

Memorials may be made to Park Street Congregational Church or M-V-K Ambulance Service.