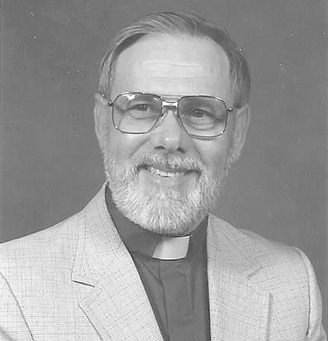 DWIGHT – Rev. Oliver Kermit “Doc” Zivney went to his Lord and Savior July 30, 2015 at Heritage Health of Dwight, where he had been a resident since early spring.

He was born April 24, 1926 in Beaver Dam, Wisconsin, elder son of Fred and Albena Roller Zivney.

He was educated in the public schools of Beaver Dam, Wisconsin, and Peoria and Polo, Illinois. He graduated from Polo High School in 1943. He received his BS in Education from Northern Illinois State Teachers College in 1949; his Masters in Divinity from Drake University in 1960; and was awarded an honorary Doctorate of Humane Letters from the Aero-Space Institute of Chicago in 1976.

Oliver was a proud veteran of World War II and the Korean Conflict. He enlisted in the U.S. Navy April 8, 1944 and began his active duty August 18, 1944. Initially he was trained as a radioman, but was sent to San Diego and transferred to the USMC, where he became a Fleet Marine Corpsman, serving with the 1st, 2nd and 6th Marine Divisions. He received training as a hospital corpsman aboard a Navy transport on the way to Guadalcanal; once there he joined the 1st Marine Division for field training in the jungles.

He eventually became a member of the Corps Evacuation Hospital #3, a unit of the 6th Marine Division, and spent more than three months in combat on Okinawa. In September 1945, as part of the 2nd Marine Division, he was sent to Nagasaki; his unit was one of the first teams sent to search for and care for U.S. POWs. He spent six months as a member of the Occupation troops. He was sent to China as part of a Marine search party, seeking wounded American flyers. His duties included not only providing emergency medical care, but also handling the gold wire which was used to trade for needed supplies. Returning to Japan, he sailed for the U.S.A. in April 1946, being discharged May 17, 1946.

He was recalled to active duty for the Korean War, serving from August 1, 1950 until November 2, 1951 as a US / Korean evacuation Flight Corpsman / Instruction, based at Glenview Naval Station and Great Lakes Naval Station. He made more than 20 trips to Korea as a Flight Corpsman, returning with some of his former Chicago 9th Infantry Battalion among the wounded.

As a pastor, he served a number of churches: his first was Colfax Christian Church. In 1962, he transferred to the Methodist Church, and served as pastor at Roberts/Thawville, Roanoke/Secor, Gridley, Fithian/Oakwood, Hennepin/ Granville, Stronghurst/ Carman, Chrisman/Scottland, and Reddick Methodist Churches. He retired in 1993 and moved to Dwight.

As a parish minister, he took part in many community activities. He was Civil Defense Director at Roberts; CD Chaplain at Roanoke; while at Hennepin, he received training as a volunteer EMT, eventually receiving the EMP rating as a National Registered EMT.

Residing in small communities, he often was called upon to help local fire departments; after retirement, he received professional training as a firefighter, received the rating as a State certified Fire Fighter III, and as a Fire Service Safety Officer. He also received training as Fire Service Chaplain.

His interest in public service led him to become a Red Cross instructor. After retirement, he became a certified National Red Cross Disaster Volunteer, serving on more than 20 disaster calls. His interest in amateur radio was put to use not only by the Red Cross, but also for local disaster needs. His call was WA9VKT.

He was a Boy Scout Explorer leader in Waukegan; was awarded the National Scouter’s Award in Des Moines; served the Peoria scouting area as the area chaplain for many years. He was very supportive of his sons’ Scouting efforts, and was very proud that his sons, Daniel and Mark, and his grandson, James Tarbet, all earned the Eagle Scout Rank.

He was a Mason, a member of the Peoria Kiltie Band as a piper. He was Grand Chaplain for the Grand Lodge of the state of Illinois. He held life memberships in the American Legion, The Veterans of Foreign Wars, The Marine Corps League, and the Second and Sixth Marine Division Associations.

He conducted more than 800 graveside services for veterans. He served seven years as the Department Chaplain for the American Legion, as well as Unit and Divisional Chaplain. He served as Chaplain to both local veteran posts.

Among the numerous awards and recognitions over the years: Honor Flight Trip to D.C. War Memorial on April 15, 2009; serving as Chaplain on Call for the Illinois State Senate, opening the Senate with prayer for many years; from the Dwight E.S.D.A., the Reddick Fire Department, the Dwight Rotary and the Dwight Board of Education.

On July 10, 1948, he married Barbara Bunker in Waukegan. She predeceased him in 1999. They had five children together: Terry (Margaret Ann) Zivney of Middletown, IN; Jan Tarbet of Lake Zurich; Daniel, who died in February 1971; and the twins, who were his birthday present one year, Diane (Hagen) Miller of Montgomery, Texas and Mark Zivney. His two grandchildren are Teresa Zivney of NY and James Tarbet of Lake Zurich.

In June, 1976, he married Shirley Ross Campbell in Indianapolis, and added six more children to his family: James (Kathy) Campbell of Joy; Bruce (Nina) Campbell of OH; Cathy McRee of IN; Karen (Jay) Juday of TN; Scott (Beth) Campbell of KY; and Amy (Mat) Samkutty of OR. They provided additional grandchildern to his family. He raised Amy as his own daughter. Shirley preceded him in death in 2010.

A brother, Richard (Pat) Zivney of Salem, survives along with his Zivney cousins of Minonk.

Visitation was from 4 until 7 p.m., Sunday, August 2, at Hager Memorial Home, Dwight, and for an hour preceding the Monday service at the church.

Memorials may be directed to the charity of the donor’s choice.